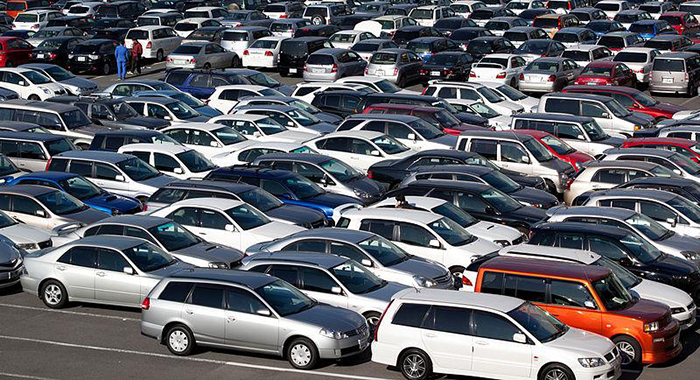 While Vincentians will pay more for a newer car purchased online, the overall cost when the vehicle arrives in St. Vincent and the Grenadines (SVG) will be less, Minister of Finance Camillo Gonsalves says.

In his Budget Address, on Monday, the minister returned to the revamp of the tax and tariff architecture on the importation of automobiles that Parliament approved late last year.

He said there was some ongoing misinformation and misunderstanding about the changes, saying that while the reductions in taxes and tariffs seem clear to the public, the surtax structure seems to be “the source of the misinformation”.

“… because it’s easy to understand if taxes are brought down, but it is more complicated to process the changes to deferred tax regime,” the finance minister told lawmakers.

He said there has been some public comments that seem to misconstrue the nature and intent of the reforms.

“Essentially, those comments can be summarised as: ‘If I bought a 12-year-old SUV under the old regime, … I would have paid X but I buy the 12-year-old car this year, and I am paying more. So, the thing gone up’,” Gonsalves said.

He said the average motor vehicle in SVG is about 11 years old and has an average total landed costs of about EC$27,000.

“Only 3% of the vehicles imported annually are new or less than 3 years old,” he told lawmakers, adding that in most cases, the tax rate for these vehicles ranges between 135% and 165% of the cost, insurance and freight (CIF).

The finance minister said that as pledged in last year’s budget speech, the government has responded to public feedback on the level of taxation levied on imported vehicles.

He said that after undertaking careful analysis of SVG’s automobile market and consumer preferences, the taxation regime for motor vehicles has been reviewed with three objectives in mind.

“Our regime reform reduces taxes across the board. But with the deepest, the greatest incentives being on newer vehicles and cars with smaller, more efficient engines,” Gonsalves said.

He said the new harmonised commodity description and coding system and common external tariff that took effect on Jan. 1 make provisions for hybrids and electric vehicles, which will be further incentivised.

Gonsalves said that prior to the reform, the excise tax rate for road tractors and semi trailers, was 55%. All categories under the heading “tractors” have been reduced  from 55% to 35%.

Motor vehicles for the transport of 10 or more passengers including the driver (vans) previously attracted an excise tax rate of 45%. Under the reform, they are now 35%.

Before the reform, the majority of motor cars and other motor vehicles principally designed for the transport of persons, including station wagons and racing cars were charged excise tax of 45% and an import duty of 35%, with the exception being vehicles under 1,000cc.

These have been reduced as follows:

The minister said that as regards motor vehicles for the transport of goods, because the construction sector is expected to grow this year, the duty on trucks of 5 tonnes and more was reduced from 60% to 30%.

“Now, we are adding smaller trucks — trucks from 3.5 tonnes and up and we’re giving it the same rate as the bigger trucks,” he told lawmakers.

“An across-the-board reduction in import duties and excise taxes is easy to understand. If we stop there, there will be fewer complaints and fewer misunderstandings.

“However, if we stop there, our primary objective of incentivising the purchase of newer more efficient vehicles would not be met. As such, we have introduced innovations to the surcharge regime to further encourage and promote more efficient and newer vehicles.”

“And the total surcharge is the product of the base surcharge by the age factor by the engine size by the CIF factor.”

The minister said there are slight variations for hybrids and buses “that don’t need to detain us in this particular presentation”.

Gonsalves said it is a fact that most motor cars 9 years or older will be more costly.

“But that is the point. We would prefer if you buy a newer more efficient vehicle. In the past, people bought 12-year-old cars because 12-year-old cars were the most affordable to bring into St Vincent and the Grenadines. Now the new sweet spot for affordability in normal motor cars will be 8 years old. For trucks, coaches and buses the sweet spot is 10 years old.”

He said that previously, vehicles cost less to purchase overseas and more to clear at the port.

“We have since reversed this by reducing the duties on the newer vehicles. Now, vehicles will cost you a little bit more to purchase overseas, but cost significantly less to clear when you bring in it to Customs,” Gonsalves said.

He said that his government, through its reform, has been able to match and in most cases surpass the rates offered throughout the region.

“Taxes on new combustion vehicles are under 100% and hybrids and electric cars will fall below 69% as a percentage of CIF,” Gonsalves said, adding that, on average, most motor cars 8 years or under will be in the region of 100% of CIF, “all things being equal.

“The same thing will hold true for trucks, coaches and buses under 10 years old. So your sweet spot has moved from 12  — stop trying to buy a 12-year-old car. Look at the prices of the 8-year-old car and you will see that when you bring it into the port you end up spending less money than if you had bought the 12-year-old car,” Gonsalves said.

He said the Customs Department has placed an intuitive calculator online that allows consumers to play with various scenarios to understand fully what they will pay at the port for different automobiles.

“We encourage all consumers to plug in their automobile data before they click ‘buy’ and to see precisely how much money they will spend in different scenarios, different ages, different models, different prices.”

The minister noted that it takes a while for cars ordered from Asia to arrive in SVG and that many consumers’ 12-year-old cars were already on route to Port Kingstown when Parliament revised the tax and tariff regime.

“Those older vehicles would be disadvantaged under the revised regime. as such vehicles with documentation indicating that they were purchased before Nov. 15 will be assessed under the old regime,” Gonsalves said.

“However, any discovery of attempts to falsify documents in an effort to cherry pick different regimes for different vehicles will be addressed using all of the legal tools at the discretion of the customs department,” he added.

2 replies on “Buying newer cars will be cheaper overall — Camillo”