Top fisherman 2013 prayed to win in light of hardships 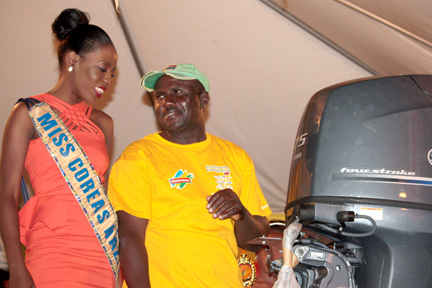 Fisherman of the Year 2013, Lenford Jack, chats with Miss SVG 2013 contestant, Brooke Legair, during the presentation ceremony at Calliaqua on Monday, May 20.

KINGSTOWN, St. Vincent, May 21, IWN – The man who emerged Fisherman of the Year 2013 says he prayed to God that he would win the annual competition, in light of the economic hardships.

Lenford Jack and the two other crewmembers of “Genesis” landed 785 pounds of fish on Monday to net the top prize of a 75hp, 4-stroke Yamaha outboard engine, one trophy, one VHF radio, and three life jackets.

Jack, who is originally from Kingstown Park, moved to Rillan Hill in 2001, when he first won the Fisherman of the Year title.

“It is not easy keeping that boat on the water. It may look simple to the folks on the land…” Jack told I-Witness News.

He said engine parts and installation are expensive and the boat crew sometimes does not turn up to work.

“It all gets you in a mood that sometimes you like you want to kill somebody or something. But, with the blessings of the father you put that aside and try to move on,” he further said.

Jack, who has been a fisherman for between 23 and 25 years, spoke to I-Witness News Monday night shortly after being announced winner at the Fisherman’s Day Rally in Calliaqua.

He said the sea conditions were hazy Monday morning and as a squall moved in he prayer for better weather, which came around 10 a.m.

He said when the weather cleared up, he and his crew saw some birds and when they went in that area they met a school of dolphins, one of which they landed one.

He said winning the 2001 title was much easier. Then, he said, he saw an object on the water, which turned out to be a shoal of dolphin. They netted more than 500 heads, he said.

Jack says he has a 37-foot trawler that he bought several years ago, but has been unsuccessful in sourcing funds from the Government to help with repairs.

He further said he has found the four-stroke engine he received among his prizes to be problematic.

He said he will sell it, divide the money among his crew and use his portion to buy a two-stroke engine.

Jack, a father of four, was accompanied by his 8-year-old daughter, Jayana Jack, as he received his engine from Prime Minister Dr. Ralph Gonsalves and other prizes from Miss SVG 2013 contestant, Brooke Legair.

Jack said three of his children go to sea with him, thereby ensuring that the tradition stays alive.