Star FM manager’s comments were not an apology, Cummings says 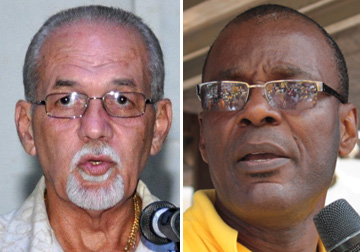 Member of Parliament for West Kingstown, Daniel Cummings, says he does not regard as an apology the comments Manger of Star FM, Sen. Julian Francis made on radio Tuesday night.

“… what Julian Francis is doing, from what I am seeing, is not an apology at all. He is making a mockery of the system and I am in discussion with my attorneys and I will be advised by them very, very shortly,” Cummings told I-Witness News.

At least two radio stations are at risk of being sued or made to apologise to Cummings as the fallout continues from a Searchlight article on Nov. 22, which erroneously stated that Cummings was involved in the demolition of a house.

The newspaper apologised last week for the error, saying it had no evidence to support what it had reported.

The article was read on a programme on Star FM, a station that is owned by the ruling Unity Labour Party, of which Francis is General-Secretary.

Speaking on his weekly programme Tuesday night, Francis said he was apologising on behalf of the station but went on to ask questions about two court documents signed by Cummings.

Cummings told I-Witness News that to his mind, Francis’ comments were not apology.

“… while it purports to be an apology, he raises others issues which places doubt on the veracity of the apology from the Searchlight newspaper. That’s what he is doing. That, to my mind, is not an apology at all.

“… If you apologise for having committed a sin, then you let the matter lie. But now you are going on to say that though you apologise for the sin, you don’t believe the sin was a sin. That is not an apology,” Cummings told I-Witness News.

Asked about the documents to which Francis referred, Cummings said:

“Those are documents filed by Cardinal Law Firm in support of the court action to remove an injunction that Derron [Dennie] and his people got against my sister and his brother and I signed those documents as the administrator of my father’s estate.”

The Searchlight article was about the demolition of a house located on the estate of Cummings’ deceased father.

“All of them know what this is about. I am not a party. The case is Derron Dennie versus Esther Hutchinson and Dalius Cummings. Those are the three parties in the case. I am not a party. My evidence is given in my capacity as administrator; very simple,” Cummings said.

“I am not a party in any way. My affidavit is in support of my sister and brother. I am the administrator and I am providing information to the court, which is factual…” he further told I-Witness News.

Cummings says that he understand that the article was read on a second radio station and that one persons has been making “some strange comments” on a third station.

3 replies on “Star FM manager’s comments were not an apology, Cummings says”