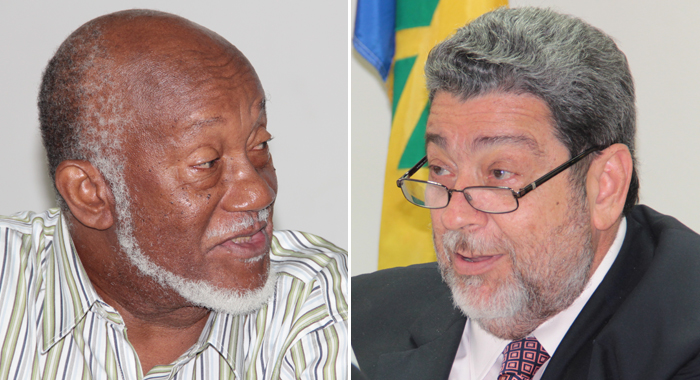 The People’s Movement for Change (PMC) says a bi-partisan agency should overlook the reconstruction after the Christmas floods, adding that it fears a repeat of 2010, where some persons affected by Hurricane Tomas are yet to receive help, while persons not affected have received disaster relief.

“Our recent history over the past 30 years has shown us that when events like this happen, the resulting relief and rehabilitation is skewed, unjust, and inequitable,” said Oscar Allen, chairman of the non-partisan, socio-political group, at a press conference on Wednesday.

“In this crisis, we are determined and we have asked the leaders to come together so that the process can be equitable and just and progressive. We also want to suggest that apart from the political leaders having a hand, the many voluntary organization and individuals who are giving support need to have a mechanism to show that their support is being used transparently.”

Nine persons died and three are missing as a result of the floods and landslides triggered by a trough system Christmas Eve. The extreme weather also left extensive damage to housing, public infrastructure, and agriculture.

(Visit our Facebook page for photos of the disaster areas)

Allen said that now is probably a good time for the reactivation of the National Monitoring and Consultative Mechanism, which scrutinizes the conduct of political parties during general elections.

“As we in the PMC opens our hearts and our consciences and our intelligence to our fellow citizens, we are asking the Vincentian public that in this time of healing and rebuilding of the infrastructure, … to consider coming together behind our political leaders and alongside our political leaders in a very firm and sustained way to ensure that the relief is done properly, adequately and equitably.”

Asked if he has any evidence that the reconstruction was being politicized, Allen said:

“One does not wait for evidence of wrong or for a break-in in your house to guard it.

Allen said he noted that Leader of the Opposition, Arnhim Eustace, had complained of not being invited a disaster response meeting the Government held four days after the disaster.

In responding to the Eustace’s comments, Gonsalves said that the nation is at war with nature, and when war breaks out, soldiers do not await and invitation — they report for duty.

“… that is disturbing and the Prime Minister himself seems to have the disposition that this is my work, I would do it, and he has been doing a significant amount of work.

“We consider two things: the nation is in a near crisis and when that happens, and as everybody’s saying, you want all hands on deck. And, without too much evidence — and it’s early — of disequilibrium in the effort, we want to make sure it doesn’t happen,” Allen said.

He disagreed with the Prime Minister’s position regarding the soldiers reporting for duty, saying it would have been “improper” for Opposition members to turn up at the meeting.

“They didn’t even know what the mandate of the meeting was, or that it was called. They couldn’t have attended something they didn’t know about,” Allen said.

During a national address on radio on Dec. 26, Gonsalves invited all local contractors, and foreign contractor who have done work for the government, to the meeting at 10 a.m. on Dec. 28.

Allen also noted that Gonsalves had said that he had consulted several persons, including former prime minister, Sir James Mitchell, about a donors’ conference.

“Isn’t that funny and strange that he had occasion and need to consult other people, including [a former prime minister] and not the current [Leader of the Opposition]?” Allen said.

“That’s distasteful and one should not take the Prime Minister’s explanations as if they are without merit for criticism.

“On that point, we will like to see in the planning of our infrastructural reconstruction, particularly to see an agency in which both parties are present. I make the point that much of the devastation happened in like South Rivers and other areas where the Prime Minister is the representative. Other devastations occurred in areas where persons in the Opposition are the representatives. I personally am fearful that in the reconstruction effort, priority and preference and privilege may be given to areas where the members of the ULP are representative over other very urgent needs in other areas,” Allen said.

“I am saying that the ownership of the process, the monopoly of the process by the government is not safe. And we are calling firmly and we will do so in a sustained manner to have this inclusive body, both state and civil society, active in the reconstruction and the relief.

“There has been so much outpouring by the Vincentian community here and abroad and by sympathetic persons and agencies and governments abroad, we cannot allow it to be misused, and that is what we are calling for,” Allen said.