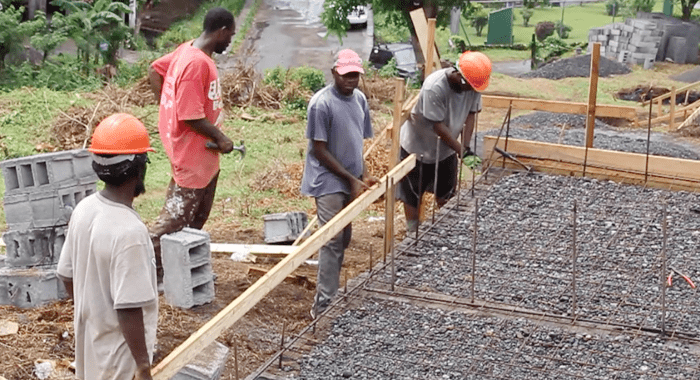 A construction team works on one of the houses in Fitz Hughes on Thursday, Feb. 27, 2014. (IWN image)

An additional EC$21 million for the rebuilding of houses damaged in the Christmas floods will be included in supplementary estimates to be debated in Parliament on April 1 and 2.

Prime Minister and Minister of Finance, Ralph Gonsalves made the announcement Wednesday as he updated the media on the repair and reconstruction of houses after the disaster.

Gonsalves said 22 houses were under construction and work on a further eight or nine will begin soon in South Rivers.

Gonsalves further reiterated that 10 persons are employed on the construction of each house.

He said that the 30 houses for disaster victims are in addition to the Housing and Land Development Corporation’s (HLDC) programme, where 18 houses are being built in Green Hill and work is scheduled to begin soon on nine more.

Gonsalves said 200 people are employed already on that programme and a further 16 or 17 houses will be built in Clare Valley under the HLDC programme.

“So, there is a lot of construction work being done …” Gonsalves said.

Some 662 houses were damaged or destroyed during the passage of a trough system on Christmas Eve.

The damage and loss to housing was estimated at EC$7 million, the government has said.