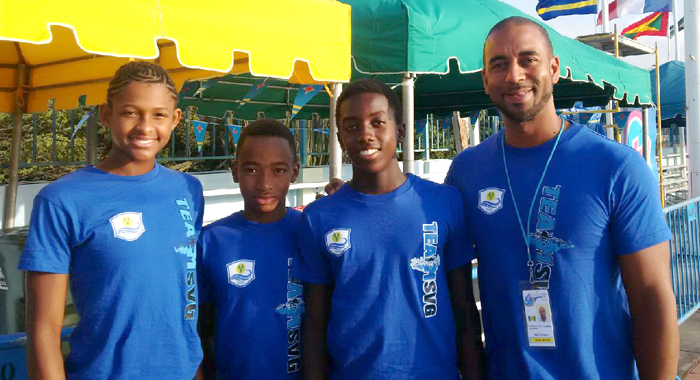 A Vincentian swimmer won a bronze medal at the 2014 CARIFTA Swimming Championships held in Aruba from April 22 to 26, falling short of the goal medals that coach Kyle Dougan said he was expecting at the meet that brought together more than 300 athletes from 18 Caribbean countries.

The St. Vincent and the Grenadines Swimming Federation said the performance of the three-member squad – Shane Cadogan, Nikolas Sylvester and Shné Joachim — were the best by a Vincentian team at the CARIFTA Swimming Championships.

“For the first time in Vincentian Swimming history we had three swimmers qualifying for multiple Finals,” the federation said in a press release.

“Shane’s performance in the final of the 100 metre breaststroke was even more outstanding when considering he had only 15 minutes between the 50 Free Final and the 100 Breaststroke Final,” the federation said.

Sylvester, swimming in the boys 13 to 14 year-old age group, qualified for the two finals and set eight personal best times.

Joachim won the bronze medal in the 100 meters breaststroke while swimming in the girls 13 to 14 age group.  I

In the 50 metres breaststroke, Joachim set a new CARIFTA record in the preliminary heats and qualified first for the finals.

Her new CARIFTA record of 34.38 seconds is only .04 seconds short of the Youth Olympics Games qualifying standard.

She also qualified in fourth position for the finals of the 200 metres breaststroke. Joachim also set three personal best times.