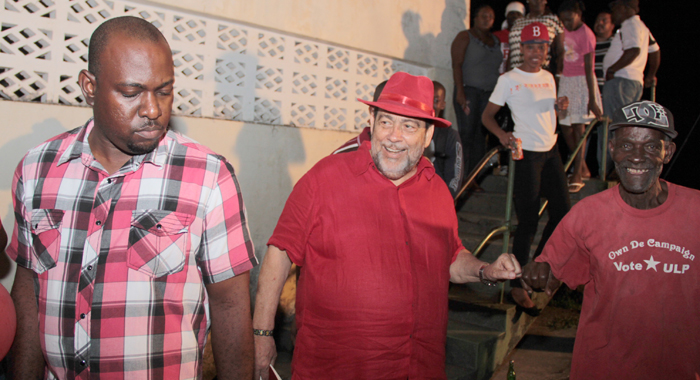 The Unity Labour Party (ULP) is confident that it can once again defy history and become the first government in St. Vincent and the Grenadines to come back from a one-seat majority and win the next general election, constitutionally due in December 2015.

The Unity Labour Party, which came to office in 2001, won the 2005 and 2010 general election, each with a reduced number of popular votes.

The party won eight of the 15 parliamentary seats in 2010, while the remaining seven went to the New Democratic Party (NDP).

“Well, you see, I will tell you this, the 8-7 before, the one with James Mitchell in 1998, you must not forget, they only won 45 per cent of the vote. We won 52 per cent of the vote,” Prime Minister Ralph Gonsalves, who is also political leader of the ULP told reporters recently.

He said that when the Joshua government had a one-seat majority, the Labour Party had far more votes than the People’s Political Party.

“This is the only 8-7 situation in which you have the party with 8 [seats] has 52 per cent of the vote,” Gonsalves said, adding, “And, by the way, no political party which had ever had 8-7 has ever survived more than two years after the election.

But when it was pointed out that the number of popular votes for the ULP has declined with each successive election, Gonsalves said:

“Yes, decline, but we won. The NDP had the advantage with the referendum wind behind their back, and, at the end of the day, they just couldn’t make it,” Gonsalves said.

He was referring to the 2010 general election, which came one year after the NDP convinced the electorate to reject in a referendum, proposed changes to the Constitution.

“And they are worse off now. You notice how defensive Eustace was Tuesday night in Campden Park,” Gonsalves said of Opposition Leader Arnhim Eustace’s speech at the NDP’s “Ring De Bell” meeting in South Leeward on Aug. 22.

“The only man who spoke about he is eminently qualified is Eustace himself,” Gonsalves said.

“Imagine this man is an MP for 16 years was Minister of Finance for two and a half, he was prime minister for five months, been Leader of the Opposition now for more than 13 years, and he is the only man talking on his platform about he is eminently qualified. Their platform is empty and the people realise that,” Gonsalves said.

Gonsalves said the NDP has been “battered very severely” after he was booed at the funeral of former NDP radio talks show Elwardo “E.G.” Lynch in Georgetown on July 19.

He further said that at the meeting on July 22 MP for West Kingstown, Daniel Cummings, “was introduced as the man who stoned a church, as though that is something to be proud of”.

The ULP is currently selecting candidates, and this month picked Carlos James and Sen. Jomo Thomas, both lawyers, as its candidates for North and South Leeward.

“Be assured, the party will have all of its candidates in all of the seats in good time, and while Eustace and Patches and the NDP are engaged in entertainment in relation to ring the bell, and Julian involved in entertainment — because he did it at a tent — there is only one man in the country who rings the bell, and that is the comrade,” Gonsalves said.