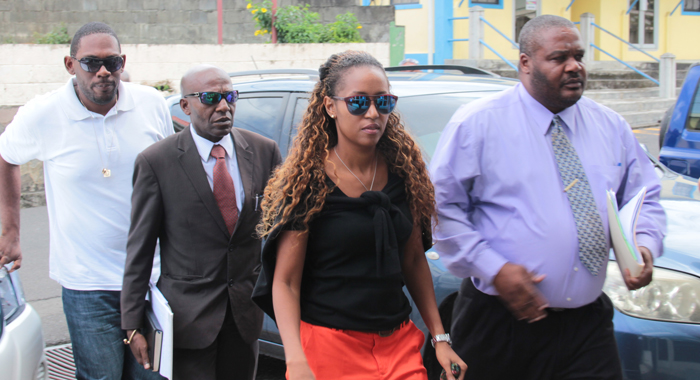 Former Registrar of the High Court Tamara Gibson-Marks was today granted EC$30,000 bail after she appeared before Magistrate Rechanne Browne-Matthias at the Kingstown Magistrate Court on three charges.

Gibson-Marks, who was asked to resign on May 21 during a 30-minute meeting with Attorney-General Judith Jones-Morgan, was charged with the theft of EC$21,925 between April 30 and May 21, 2014.

She is also charged that “on May 7th, 2014 in Kingstown St. Vincent and the Grenadines being a person employed in the public service who being authorized to give a certificate touching any matter by virtue whereof the rights of any person may be prejudicially affected did give a certificate which was to your knowledge false in a material particular to wit an order claim 96/1980”.

Gibson-Marks was also charged with “Being employed in the Public Service did in direct abuse of the authority of your office as Registrar of the High Court an arbitrary act prejudicial to the rights of another person to wit request that account number 800300 at St. Vincent Co-operative Bank be closed”.

Gibson-Marks pleaded not guilty to the charges and was granted bail with one surety. She is scheduled to re-appear at Kingstown Magistrate Court on Oct. 7, 2014.

Gibson-Marks appeared in court less than 24-hours after her first known return to St. Vincent and the Grenadine after she left the country for St. Lucia 90 minutes after her resignation.

She arrived at the court building accompanied by two officers from the Criminal Investigation Department at 12:16 p.m., 65 minutes after a police officer had announced that the court had been adjourned until 9 a.m. Friday.

Journalists, acting on a tip off, had been waiting outside the court house from shortly around 10 a.m., since sources had said that the former registrar was expected to be brought to court sometime between 10:30 a.m. and 11 a.m.

Her husband arrived at the court sometime before Gibson-Marks.

After the hearing, Gibson Marks exited the court through a side door, and is believed to have left in a white, heavily tinted vehicle that left the court precinct immediately after.

Gibson-Marks is also slated to appear in court in early September to answer disciplinary proceeding instituted by the attorney general.

She is being asked to show cause why she should not be disbarred from practising law in St. Vincent and the Grenadines.