Clare Valley homeowners were banned from visiting during construction (+Video) 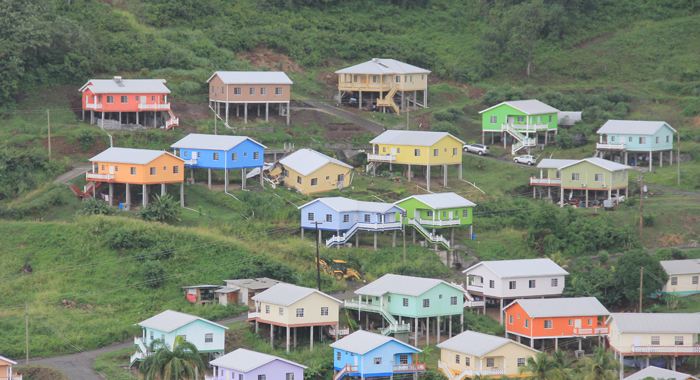 Some homeowners at the government’s housing project in Clare Valley, where a house collapsed on Sept. 19, were banned from visiting their houses while they were being built, after the homeowners complained about substandard work.

The homeowners were banned even as the Housing and Land Development Corporation (HLDC), the state-agency responsible for building the houses, failed to maintain oversight of the builders who won the contracts to construct the various houses.

“My very first complaint to HLDC was a letter dated March 8th, 2012, and that was even before I occupied the house. And I remember going to visit the house and seeing a lot of things that, to my untrained eye, were not in keeping what I think should be happening when a house is being constructed,” homeowner Rhondeen George told a meeting of homeowners, and housing officials in Clare Valley on Saturday.

I-Witness News understands that George had complained about the “hit-and-miss” manner in which the house was painted, chips on the concrete rails on her veranda, unfinished tiling work in her bathroom, a scaffold to the back of her house that hadn’t been dismantled after six months, and a breadfruit tree stump in the entrance path to the house.

“And I remember when I complained I was told that I would not be allowed to visit the property during construction. And a lot of homeowners will agree that we were banned from the site during construction, because we were complaining even before,” George told the meeting.

“I moved into my house and I start experiencing shaking,” said George, who was one of several persons who told the meeting that their houses were shaking, while another homeowner said his house is “dancing”.

“I have written to HLDC, and I got back a letter I found at the time to be very disconcerting, where I was asked by then manager Mr. Morris Slater if I am not happy, I can come back and get back my money,” George said of the former HLDC manager, who died in January 2013.

“Since then, I have gone to Mr. France, I have gone to [Manager of HLDC] Mr. [Elvis] Charles. He would recall that last year HLDC had to retile my entire two-bedrooms, along with the corridors inside,” said George, who was also among several homeowners who complained about tiles “popping” off their floors and bathroom walls.

George also said she has problems with water, since there is no drainage, and the wastewater from her house just goes into the land below.

The lack of drainage was also a recurring problem highlighted by homeowners.

“I look at my house, there are lots of cracks — no beams. I assume, like Jasmine said, there must be floating beams, because, from the living room back to the kitchen, there are absolutely no beams,” George told the meeting.

Another homeowner had said that when she complained to Slater, an architect and engineer, that the concrete house did not have beam underneath as other do, she was told that there are “floating beams” even though she can’t see them.

And, Chair of the HLDC, Beresford Phillips told homeowners that they have “genuine concerns”.

“And, as far as the HLDC is concerned, from here on, I believe to my heart that we are going to improve the supervision, because that’s one of the problems — poor supervision; because, if we had proper supervision, in a lot of cases, the contractors couldn’t do what they like. So, again, I apologise, and we will try from our end to improve the relationship between the HLDC and you homeowners,” he said.

Meanwhile, Minister of State in the Ministry of Works, Sen. Julian Francis, who was Minister of Housing when some of the houses were constructed, told the meeting that some of the concerns were the result of poor workmanship.