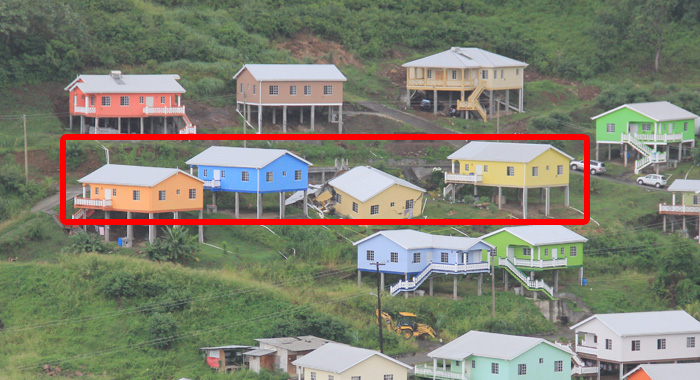 The builder who worked on the collapsed house says those near it could be in jeopardy.(IWN photo)

The Housing and Land Development Corporation official who supervised the construction of the house that collapsed last month, says he has no comment, even as the contractor has accused him of not supplying the tool needed to dig a proper foundation.

The building contractor who laid the foundation and did other work on the house, said Bacchus, the site supervisor, did not provide an electric concrete chipper (“Hilti”) as requested to set the concrete stilts at the appropriate depth.

“If you go dey and clear out where them column (concrete stilts) dey break out from, you go see the kind of depth that them column dey get in the top (closest to the mountain),” the contractor, who asked not to be identified, told I-Witness News on Thursday.

He said that while a column foot should be at least three feet deep, some of the columns under the three-bedroom concrete house only went down 18 inches.

Prime Minister Ralph Gonsalves has said that poor engineering, poor drainage and the type of soil contributed to the collapse of the house.

The house was constructed about two and a half years ago, and belonged to physician Katisha Douglas.

The contractor said he left the job after a disagreement with the Housing and Land Development Corporation over financing, reportedly after changes were made to the design of the building.

“Government want money, but government have to do thing in the right way. I always saying that. You can’t cut back on this and that … You do it the proper way and yo get people money. That’s how I see it,” the man told I-Witness News, speaking in dialect.

“I myself do my fencing wall and I borrow a Hilti and dig out for my fencing wall home. So you going tell me you digging out a column hole you can’t bring Hilti on a big site, that you been ah praise up, for men do wuk?” the builder told I-Witness News.

He said Douglas’ house was the second he was constructing at the government’s housing development in Clare Valley, and that he had worked on the house for several months before leaving the job.

“And after reaching certain place (stage), I start to get little problem and thing concerning finance and those things. So them end up take it over and say they will finish it,” he told I-Witness News.

“I still feel that spot was not the right place to build them kind of house there, concerning getting foundation. When I start digging the foundation, the supervisor used to come around and I used to complain and say, ‘Mr. Bacchus, we need a Hilti to get holes here to plant these columns.’ And he mentioned ‘whatever you get, take’,” the contractor said.

“while a hole supposed to be three feet down to the columns, and in certain place you can’t get that, especially the top side. Where we got four columns in the back, at the topside to the road, we only got about 18 inches,” the contractor said.

The contractor said his seven-member crew had to use pick hoes to dig column hole.

“And them things used to get me upset because the men were complaining,” the builder told I-Witness News.

He said that when he built the first house at the project, he used 10”x10” columns. “Then they say they cutting down to 8”x8” and all them kind of foolishness there,” the contractor told I-Witness News.

He said he was not told why the size of the columns were reduced. “… but you know government do thing at a cheaper rate. They looking at cutting back on everything,” he, however, opined.

Minister of State in the Ministry of Work, Sen. Julian Francis was Minister of Housing when the first 18 houses at the site in Clare Valley were built.

He told a meeting of homeowners last weekend that the Chief Engineer has confirmed that an 8”x8” column “is not the right column” to be used under the houses in Clare Valley.

“Dr. Douglas’ house had 8”x8” columns, and the one for Hans King’s sister next door has 12”x”12 columns,” Francis noted at the meeting.

“… if I were a contractor and I see a house going up next door and I see the contractor over there doing 12”x”12 columns, in my mind, I say he getting more money than me. How could he afford to build 12”x”12 columns when my contract has in 8”x8” columns? … So, there was conflict in there, because all those three houses are on the same level,” Francis said.

But the contractor said there were several challenges when building the house, including the supervisor reportedly instructing him to construct the patio facing Chauncey (toward the mountains), while the building plan has the patio facing the sea.

The contractor said that when the owners came to see the house, workmen were already laying down bricks, and they had to redesign the house to place the porch as it was on the plan originally.

He further said another porch was added to the topside of the house, which was not on the original plan.

The contractor said that after he and the HLDC could not come to an agreement over how much he would be paid to do the additional work, he left the project.

“And them keep the house and finish the house,” he told I-Witness News.

The contractor, who said he built about six houses, including his own, before working in Clare Valley, said he believes other houses on the stretch where the house collapsed could be in jeopardy.

“Anything could happen to them house down there. Hear me when I tell you that. … Them house they go slew any time,” said the contractor, who now works as a tradesman on another government project.

Francis told the meeting on Saturday that he has spoken to the homeowners next door to Douglas, “and it doesn’t sound as if they have the problem as serious as I have heard other people say.

“Those four houses in that row are receiving very close attention,” he said, adding, “I want to assure you all, we will move with the quickest speed.”

Chair of the HLDC, Beresford Phillips told I-Witness News on Thursday that Bacchus would be better positioned to respond to the contractor’s claims.

Phillips, however, said it is strange that a contractor would not be supplied with a Hilti, since the HLDC has always had the tool, and more than one were assigned to the Clare Valley project.

Correction: In an earlier version of this article, we said Sen. Julian Francis was Minister of Housing when most of the houses at the site in Clare Valley were built. Francis was actually Minister of Housing when the first 18 houses were built. He left that ministry in 2009, and has since been succeeded by Saboto Caesar, Clayton Burgin, and Montgomery Daniel. The four houses in question were not built during his stint at the ministry.