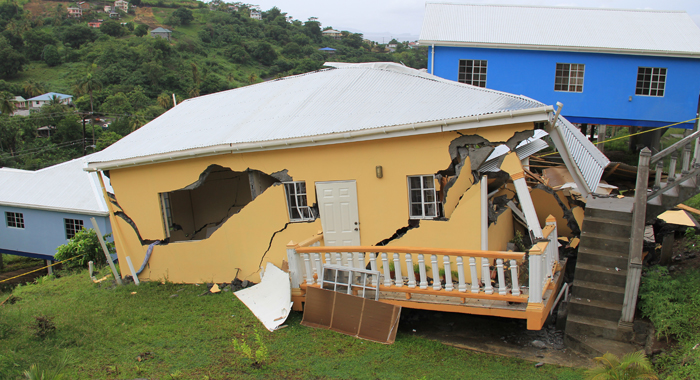 The house collapsed on Sept. 19. The owner had previously complained to the government the house was shaking. (IWN photo)

When you have evil in your heart you can almost be certain things will inevitably go wrong — karma will get you.   That’s what has happened, and that’s the basis of the ULP housing schemes.  They like to describe them as a government housing schemes; that is not true.   They are schemes designed by a political party that is in a position of power to build houses for their own supporters, in areas where they need to boost their voting electorate. It’s no more, and no less than that.

It’s an attempt to move whole swathes of supporters into areas where the ULP has low support.   It’s the old British Labour Party style of increasing votes where the party needs votes to get elected.   A practice invented by the British Labour Party government in the early days when nasty Marxist types and other little red devils ruled the country.

The British Labour Party in 1951 established a scientific socialist revolution, which planned to build council houses in the UK for rent and sale in areas that traditionally had low socialist support. They went to pretty little towns and villages of a few hundred or a few thousand people and supplanted a populace that greatly exceeded that of the original people count, sometimes by more than double.

That is exactly what the ULP government wants to do.  Plant, install large numbers of people in housing projects in areas where they previously could not get elected. It is similar to what was done in Jamaica with the voting garrisons. But to do that they must ensure that those who take the houses are grateful to the party and will vote for them come hell or high water. But this cannot be a fair government policy; it can only be a party political policy dressed as a government giveaway scheme that benefits a certain section of the populace while excluding others —  a sign of the ULP’s good governance policy in the 21st century.

One of the main differences between the British government of that time and the Vincentian government of this time is a fiscal matter. The UK was flush with money and could print their own currency whenever they ran short. The current government of SVG is broke; it can’t afford toilet paper in the public toilet at the hospital. It can’t afford to fund the upkeep of our roads, buildings and infrastructure, let alone build large numbers of houses for low income.

When the ULP had the brainwave of building to the socialist scientific formula, the government was already broke. They already had managed to bring down the state owned bank by excessive borrowing.  Even what I describe as ULP cronies had borrowed from the bank and were unable to repay their debts. The bank, under such onslaught, appeared doomed to fold. The ULP, or perhaps the ULP government [the supporters, even the hierarchy, don’t know the difference] therefore had the brilliant idea of acquiring low priced land and giving that to the proposed house buyers. Of course, these lands that had no value, because they were problem lands. That is extreme slopes and soil problems such as the lands at Clare Valley [price of land still awaited].   The lands at Clare are clay based upper structure with an “abu” base. The clay topsoil is of no use for farming or growing crops, and the base material is an unstable type of clay that has many rocks and stones in it.  When dry it shrinks and when wet it increases in volume considerably and is unstable and sticky, somewhat like runny plasticine.  It is therefore unsuitable for farming or building.  In fact, the land in Clare Valley has laid fallow for years. Despite a number of reports that carry warnings about such soil, the ULP government went ahead and built on it. They must have been aware of the inherent problems, and if they were not, they should have been. The results being that one house has fallen off its stilts/columns and others are at risk of doing so. People’s lives are in jeopardy — men, women and children living in these houses at Clare Valley are at great risk.

I have recently acquired a USAID report from the 1970’s and it has maps and plans showing all areas in SVG with such soils as those at Clare Valley. It may quite well be  that Clare Valley is not the only government building site with such problems.

The government, as part of the brainwave and because they could not borrow money at the time from the banks, proposed house owners borrow the money themselves from lenders for payment of building their houses, and such loans were paid over to the state-owned HDLC, presumably to try and put the government at arm’s length in the project, lest it goes wrong – as it has.

So now the government believes they are one removed from the borrowing source and perhaps also HDLC and the building contractor put them further out of reach. If the current house owners don’t pay the mortgage it’s between the owners and their banks. Therefore house owners are in the crap, not the government. But in truth, it’s not quite as clear-cut as that, as some may think. If the house owners stop paying their mortgage lenders, that will be the total end of the government socialist scientific building programme, because no lender henceforth will lend to people who buy into such schemes.  That’s why the government spokesman is saying don’t abandon your house, begging the people to stay in the homes regardless of the consequences and regardless of the risk to life and limb. In fact, it appears with no regard to the possible consequences of staying in their homes at Clare Valley. The owners need to wise up and get themselves a lawyer to represent them as a group, preferably a lawyer with no government or ULP links, association or affiliation.

The ULP government thinks nothing of poor people, because most of them don’t vote for anyone let alone ULP. So the houses that they describe as low- and middle-income homes simply are not that at all. They are upper-middle income homes.  No low-income or lower middle-income earners could afford these homes. The words low income is concocted to fool the people that they are doing something for the poor; they are not!  What they are doing is creating a new upper middle class electorate that will consistently vote ULP. That is the only reason for the building of these types of homes in SVG. They are not social housing, they are not for low-income citizens, they are not for the poor and needy, they are not for none ULP supporters!

These are houses for people like lawyers, doctors, well-paid government workers, ranked  police officers, and even the sister of Ralph Gonsalves’ press secretary Hans King has one. Party and supporters first; own the jobs, own the government, and own the houses!

But it has just backfired. The homes at Clare Valley are now blighted and likely worthless. Whatever they do to them, even rebuilding them, they will always be blighted; that’s the way it works.  They have been sold what’s called “a pig in a poke”!  The current owners have homes that are worthless and will likely remain worthless for the foreseeable future.

The ULP party can walk away without a loss, except that is in votes, and rightly so. This is yet another example of them stumbling from crisis to crisis.

Can we accuse the owners of being driven by greed?  A group who thought their party was giving them an exclusive half price deal, even given them bargain houses worth two or three time what they paid for them. Yet what they have now ended up with are homes that are worthless, homes that are blighted and un-saleable at any price, and homes that in law can only be described as unfit for the purpose for which they were purchased.

I suppose some may of had greed in their hearts and minds, as they saw this as a golden opportunity to get ahead. But no one deserves being ripped off regardless of party affiliation or beliefs, even if misguided in such.

Let’s pray that there are no major earthquakes in the near future, because all these houses may fall like a pack of cards.