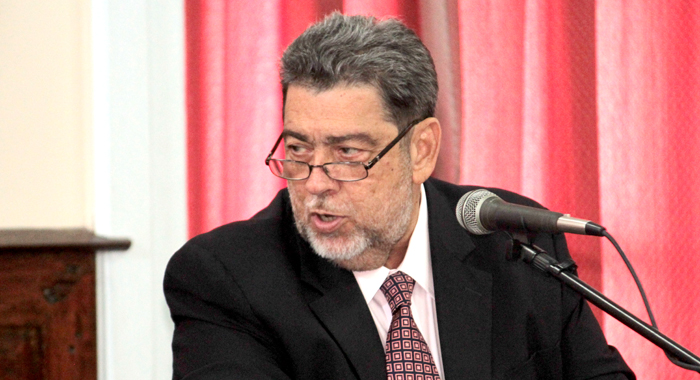 Prime Minister Ralph Gonsalves says he will launch a programme, “Ask Prime Minister”, on the state-owned radio station to allow citizens to ask questions of the government, since opposition lawmakers did not submit any questions for the last sitting of Parliament.

“These include the continuing persecution of businessman Bigger Bigs, the case of the High Court registrar, the ongoing poor fiscal and economic situation, including the high and increasing levels of unemployment, the Clare Valley fiasco, government’s debt to the private sector, and the state of the National Insurance Services, among others,” Eustace said.

Gonsalves told Parliament that the opposition’s boycott was unjustifiable.

He told lawmakers that question time is one of the most important parliamentary mechanisms to hold the executive to account.

He noted that each of the nine opposition MP are permitted ask three questions for oral answers, a supplementary to the answer to each of those questions, and four questions each for written responses.

“You want to tell me that with all the issues which they have mentioned here, among others, they can’t find anything to come to Parliament to ask the 27, plus the 36 and then, if the circumstances arise, to ask the 27 supplementary?” Gonsalves said.

“Mr. Speaker, that is the way you hold the executive to account. But you are not doing the job for which you are elected and you are hoping that people would promote you to a higher job?

“Now, when you do not do the job for which you were elected, you do not normally get promoted; you get fired,” Gonsalves said.

“I want, as someone devoted to parliamentary democracy and to justice and freedom in this land, and as someone who believes in committed and passionate sense in St. Vincent and the Grenadines and our people, it is my duty therefore to announce, that if the opposition wouldn’t come here to ask me any questions, or ask the executive any questions, I will, as far as my official duties are concerned, not in my political sense, I will host a weekly programme of about an hour, hour and a half, I will make the arrangement through the state-owned radio station, and see how we can get it covered on other stations too, on a particular day, at a particular time, so that citizens of this country, who are being not represented by the opposition, who are let down by them, that they can write to me, and they will put on the envelope and drop it off at the office, ‘Question for the Prime Minister’ and under the heading ‘Ask Prime Minister’, that is what I will call the programme. And they you can call in also and ask,” Gonsalves said.

He said that such a programme must avoid scurrility so as to keep it at a level similar to when questions are asked in Parliament.

Gonsalves said he will ask Minister of Telecommunication, Sen. Camillo Gonsalves, to work with the officials and the Cabinet Secretary to set up the requisite account for question to be sent via email.

Gonsalves anticipated that the questions received will probably be more than he can answer during any one programme.

“So, since the opposition is not here to do its duty, I am asking the people to assume that duty and to ask the prime minister. They must stop this tomfoolery with the Parliament of this country and the people’s business,” the Prime Minister said.

Gonsalves once hosted a programme, “Ralph on Star”, on his party’s radio station.

However, that programme has not been aired for some years now.