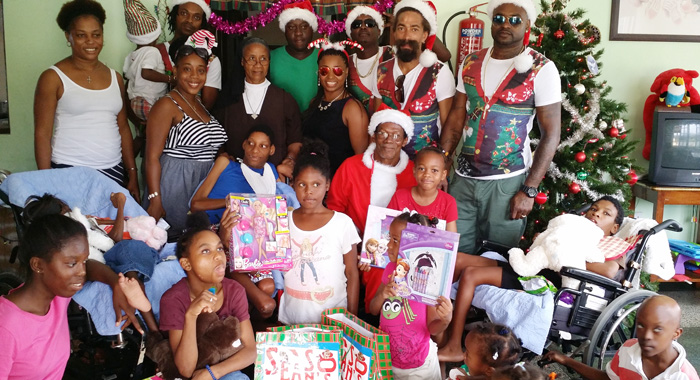 The Get Nice Crew, pose with staff and children at St. Benedicts Day Nursery and Childrens Home in Georgetown.

On Christmas Day, the Get Nice Crew, which comprises mainly Vincentian nationals residing in Brooklyn, New York, visited to the Pediatric Ward at the Milton Cato Memorial Hospital and the St. Benedict’s Day Nursery and Children’s Home in Georgetown to spread the Christmas cheer to the many children who were warded at these three institutions.

Main organisers of the initiative, Candace Gordon-Llewellyn, and Sylvia Llewellyn said that the group decided to organise a toy drive in New York so as to give back to the less fortunate children in SVG.

This initiative resulted in the package and posting of six barrels to SVG.

On Christmas Day, Santa and his helpers journeyed to Georgetown where they distributed toys to approximately 30 children. The group members were humbled by the experience and enjoyed interacting with the children and staff.

Later, the group travelled to the Paediatric Ward, where they presented gifts to approximately 10 children. The parents present were grateful for this gesture and thanked the group for remembering their kids on this special day.

The group distributed the remaining toys to the children of Rose Place and intend to present a barrel each to the Salvation Army Children’s Home and the St. John’s Roman Catholic Church in Mesopotamia.

With support, the Get Nice Crew hopes that its toy drive can become an annual event and that it can extend the Christmas joy to other similar children organizations in the future.

The Get Nice Crew expressed appreciation to its members, non-Vincentians and Americans for their contribution to the effort.