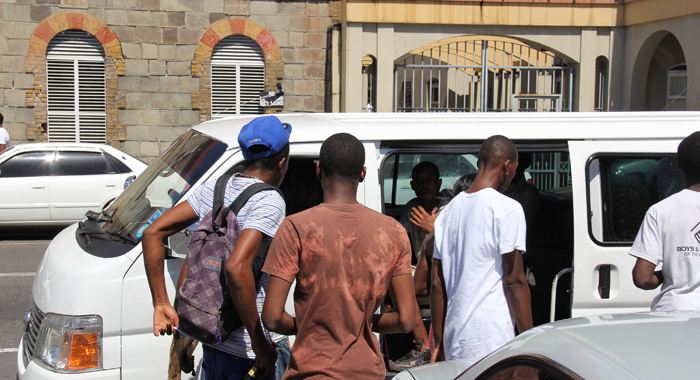 Two minibus drivers were Thursday afternoon released from police custody and issued traffic tickets hours after they were arrested during a protest over the poor conditions of the roads along their route.

“The whole road condition is terrible out there,” President of the National Omnibuses Association Anthony “Code Red” Bacchus told I-Witness News of the roads in the Belair-Gomea area around 1:30 p.m., shortly after the two drivers, Leroy Farrell and Devon Bushay, were released from police custody.

Minibus operators travelling the Kingstown-Belair/Gomea route withdrew their service on Thursday after the government failed to meet its promised to begin repairing the pothole-ridden roads by Wednesday.

They had initially planned to strike last Monday, but put the protest action on hold having been promised during a meeting that the road repairs would have commenced by Wednesday.

Bacchus said that minibus operators didn’t see any work being done by Wednesday. “So, the gentleman, as they had planned, got together and started striking this morning. When they started striking now, the police officers came up there and arrested the two gentlemen and charged [them],” Bacchus said.

He said that the police initially wanted to charge the two drivers with being hazardous on the road. “But how can you be reckless when you are not moving?” he said.

Bacchus said the men were issued traffic tickets and released after Francis intervened and following talks with Commissioner of Police Michael Charles.

“The Traffic Department wanted to prosecute them in front the magistrate. I went and spoke to the Superintendent, but he didn’t seem to want to listen. So we went above, and, by the will of God, they were released,” Bacchus told I-Witness News.

Farrell said he was issued an EC$80 ticket for parking 15 feet from a corner and another for “failure to comply”.

“The other charges were driving reckless on the road and being a hazard and a hindrance to the public. Those are charges that you can go to jail for,” he said.

The driver, who serves the Kingstown-Belair/Dauphine route, said the conditions of the road in the Belair-Dauphine area “ain’t pretty at all.

“It’s like every day you hear something new on your van shaking: the rubber, your this — trust me, it is not worthwhile working on,” he said.

Bushay was issued an EC$80 ticket for obstructing the free flow of traffic.

“We were just protesting in Belair, driving slowly, and the police just approached and said, ‘I want you’ and that was the start of it,” he said, adding that he was arrested by an officer o the Rapid Response Unit (“Black Squad”).

Bushay said that at the Central Police Station, where he and Farrell were taken, they were told that they were driving recklessly and hindering the flow of traffic.

The Roads, Bridges and General Services Authority (BRAGSA) Thursday afternoon dispatched a team to begin preparing the road for repair.

Bacchus said that in light of this development he will advise the minibus driver to cease their protest action.

“BRAGSA also approached us and explained that at first they were just going to do gravel in there, but I guess they see how serious the gentlemen are about the road safety and so forth that they decided to go ahead to fix the road properly with the oil patch. So, he explained to us that it is going to take a couple of days for the oil to boil up, get hot, so by Monday, they should start the actual patching,” Bacchus said.

He said the minibus operators were told that the road will be patched all the way up to Kelbourney.

“… it will be unfair that we see the work being done and still passing them and striking. Because, bottom line is that we don’t really want to inconvenience the travelling public in the area, but we had to take a stand. We had to take a stand and try to get thing done,” said Bacchus, who serves the Kingstown-Prospect route but withdrew his service in solidarity with the members of his association.

He said the road, in its present condition, “is terrible,” adding, “Something needs to be done about it. That is why we come out to show our strength.”

Bacchus, however, said that there are a lot of other areas in the country where “the roads condition is very bad”.

“I don’t know why these areas are being neglected. Due to the fact that the road are bad, it could be hazardous, not only to the vans, but to the passengers,” he told I-Witness News.

“One of the areas in Belair right before the spa, the bank is giving away. It is a cliff of more than 100 feet below — far deeper than Rock Gutter,” he said in reference to the area in North Windward were a bus careened down a hill and plunged into the sea, killing seven students in January.

“And where that turn is, there is a big pothole there and the persons now have to get away from that pothole and go close to the cliff. If somebody is driving in that area and don’t now the cliff is there, they can fall over. And we thank God so far no one has fallen over. And all these things we want to get addressed.

“And I just want to say to the government, please pay attention to the secondary roads that these drivers have to travel on; the roads up in the villages. It is not only hazardous to the vans and costing the owners extra money, but it can be hazardous to the travelling public,” he said.

4 replies on “Minibus drivers arrested during strike over bad roads”