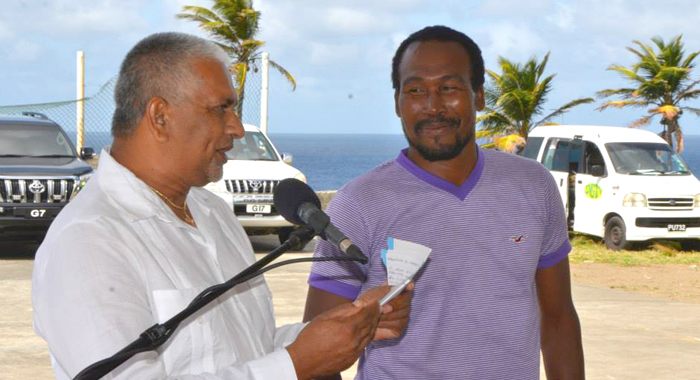 Police in St. Vincent and the Grenadines have been urged to clamp down on reckless drivers, especially those who transport the nation’s children.

Chair of the National Lotteries Authority, Murray Bullock, made the call on Thursday as a ceremony to commission the new school bus purchased to replace the minivan destroyed in the Rick Gutter Tragedy on Jan. 12.

Bullock’s call came even as he commended Ulrick Lavia, the driver of the new school bus, after the vehicle made its inaugural trip to Fancy, where it will be based.

“Young man, you look like a young man but you drove with maturity,” Murray said to Lavia, who he called to the podium as he made the point.

“I had the pleasure of driving behind the bus coming up [to Fancy] and I want to commend you on the way you handled the bus. I hope it is not just for today. I hope that the way you drove today and the due care and attention that you paid to the students and your passengers you will continue to do that,” Bullock said.

“Too often, we see people carrying passengers, and especially school children driving like bats out of hell. And sometimes, I wonder if the police services cannot be better deployed, instead of looking to see who park in front of FirstCaribbean Bank to go inside and quickly withdraw a hundred dollars — to buy gas — from the ATM and you get clamped,” Bullock said.

He said he supports one hundred per cent the work of the police. “But I am saying that the resources can be better deployed by looking at the reckless way in which some of these operators carry the future of our country in their hands, and the poor children, not knowing better, lean out of the vehicles and laugh when they pass somebody.

“… as a country and as a community, we have a very difficult task ahead. We have to ensure that these kids are trained and trained properly, that they understand their danger. And we have to ensure that the people we put in charge, in driving, transporting, taking care of vehicles and so on, understand the awesome responsibility that they have,” he said.