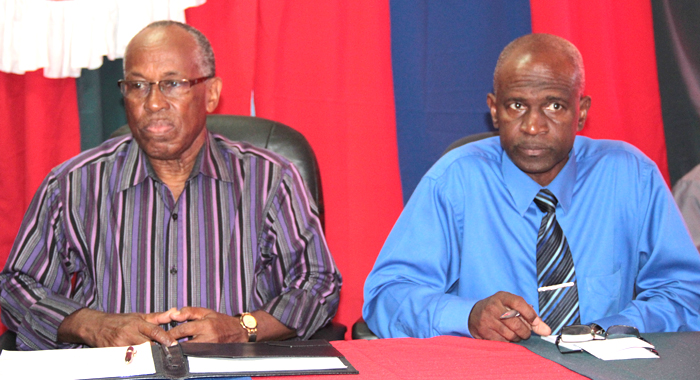 Maxwell Charles has defended his performance as Parliamentary Representative for Central Leeward amidst criticisms of his stewardship by his successor candidate, Sir Louis Straker.

Charles, responding to questions at a Unity Labour Party press conference on Monday, also attended by Straker, hinted that he will not discuss the party’s internal business in public.

“A political party is like a family living in a house. And in that house you have a porch, in that house you’d have a toilet, you’d have a dining room, and, most of all, you will have a bedroom. Without going into any detail, if what you should talk in the bedroom is spoken on the porch, you have a problem,” Charles said when asked to comment on Straker’s analysis of his tenure.

Straker was secretly recorded one week earlier saying there were a lot of complaints that Charles, who was elected in 2010, “is too laid back”.

He also said that the National Reconciliation Minister “is not aggressive enough to look out for his people”.

The ULP has brought back Straker, who retired from politics in 2010 after 16 years as MP for Central Leeward to carry its banner in that constituency in the next elections, widely expected this year, but constitutionally due in March 2016.

“I think I represented the people of Central Leeward. I brought the seat home in 2010, and the rest is history,” Charles said.

“I think I have been a good representative of the people. I think I did my best with what was provided, especially from central government,” he told the media.

“If you have a cake, it’s got to be divided, and each person gets a slice. So I think I did my best with the slice with which I was provided,” the former educator and diplomat said.

“Coming to be a representative of the people, you know, all my life, I have dealt with people, whether it be at church, the community, school, the field of diplomacy in the UK, whatever. And I think one of my gifts is to deal with people. There was never a time when a constituent of Central Leeward came to my office and went out saying, ‘I don’t like how Maxi talked to me. I don’t like how he dealt with me.’ They might disagree on a policy, but, by and large, I think I represented people to the best of my ability,” Charles said, adding that his house analogy is applicable to any of the political parties in St. Vincent and the Grenadines.

Meanwhile, Straker told the press conference that his comments about Charles were “blown out of context”.

One reply on “MP won’t bring political bedroom onto patio”