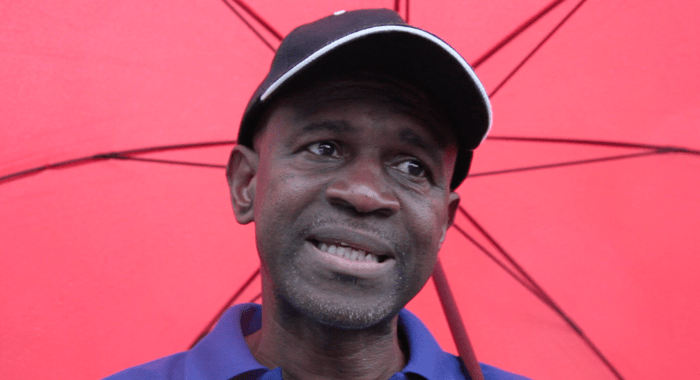 One day after coming out of retirement to replace sitting MP Maxwell Charles as the Unity Labour Party’s candidate for Central Leeward in the next general elections, former Area Representative Louis Straker described Charles as a laid back politician who failed to represent his constituents.

Straker’s comments about the man who succeeded him in 2010, after 16 years representing Central Leeward, were recorded, supposedly surreptitiously, as he conversed with constituents on Monday.

In the seven-minute audio recording, Straker speaks of his response to political leader of the ULP, Prime Minister Ralph Gonsalves when Gonsalves asked him on Sunday to be the candidate again after Charles and his contender, Dunstan Johnson, both refused to give way to each other at the party’s constituency conference in Peter’s Hope.

“You know what is puzzling me, Mr. Straker? Mr. Charles did not lose his seat. He is the candidate (sic) for Central Leeward. Why they had to bring in Dunstan?” an unidentified female asked Straker, who is a former deputy political leader of the ULP, and former deputy prime minister and minister of foreign affairs.

Straker explained that it is the policy of the ULP ahead of each general election to go through the candidate selection process.

He said that Gonsalves sat with both Charles and Johnson for more than an hour and told them one must give way.

If the supporters of each are standing behind them and they are not backing down “then they have to have a candidate,” Straker told the constituents.

The Prime Minister said that whoever won there (consistency conference) would lose the real battle (in the general elections), because the people in Layou are saying one thing and the people in Barrouallie are saying something else,” Straker said in reference to the local politics of the constituency’s towns.

“Listen, Charles is my brother and is my good friend and is a fine gentleman — a nice person. But there were a lot of complaints about him that he is too laid back,“ Straker said of Charles, who like him is a Seventh-Day Adventist.

“Mr. Straker, yo’ bin softy too,” a woman responded in an apparent reference to Straker’s disposition during his earlier years in politics.

He said that since he left politics in 2010, a young girl came to him saying that she wanted to enrol at the School of Nursing.

The young woman had gone to Charles, who told her that she would not be accepted since she had only passed four subjects, and advised her to wait until she passes a fifth subject, Straker said.

He said Charles helped her to get the fifth subject.

“I said, ‘Leave it to me. I will help you to get into nursing’,” Straker said, recounting his conversation with the young woman after she had passed the fifth subject.

“She passed the subject in June. When the list came out she went and Mr. Charles said, no, your name not on the list, he can’t do anything about it. She came to me, I said, ‘You can’t come to me now, the list is out. How am I to help you?

“I called the committee, the chairman of the committee, a lady named Mrs. George from Mesopotamia. She said, ‘Comrade Louis, Mr. Charles gave recommendations to eight people, but he never called and said ‘At least put this one here,’” Straker said.

“They said I called and one candidate — she lives in Layou coming out of Layou there, that’s where you call Horne Corner. She said she tell them ‘Comrade Louis has recommended this lady here, we have to take her.’ I felt bad, because they are very poor people, and Maxwell could have called them, but he is not aggressive enough to look out for his people. And he is not the only one,” Straker said.

Straker said that when constituents came to him, he told them he is not the representative for Central Leeward and that they should go to Charles.

“They will just suck their teeth and walk ‘way as if to say tha’ waste of time. Listen, Maxwell is a fine gentleman, but I don’t think he is cut out for –“ Straker said.

Other persons in the conversation said they don’t like what was done to Charles.

“Maxie always said he wanted to take my place when I back out. But you have to be a little bit aggressive in politics. When I sit in Cabinet and tell them I want that for Central Leeward, they use to tell me I am damn greedy, I want everything for Central Leeward. How you think you get your learning resource centre there?” Straker said.

But one woman asked: “If Mr. Charles is too soft, don’t you think you all should be his backbone to strengthen him?”

“Who must do it?” Straker asked in response.

“You who been there already,” another woman said.

Straker said that in the past four years Maxwell has called him twice.

On one occasion, Charles telephoned to inform him that the Central Executive of the ULP wanted to give Straker a plaque for his years of service and another time, Charles called about some lands that the Housing and Land Development Corporation was inquiring about.

General elections are constitutionally due in March 2016 but are widely expected this year.