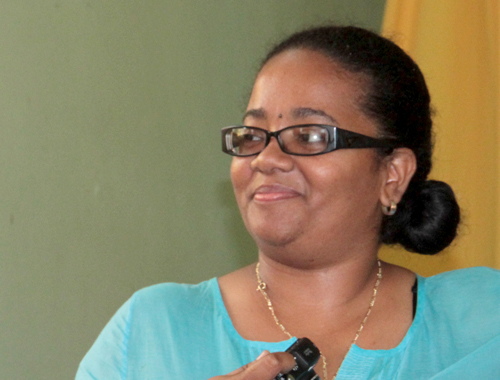 An opposition lawmaker says that St. Vincent and the Grenadines needs to address the issue of same-sex relationship and that she is well positioned to lead that discussion, because of her perceived sexuality.

Sen. Vynnette Frederick, the New Democratic Party’s spokesperson on gender issues, told the party’s “Conversation with Women” on Monday that her party is very aware that SVG needs to start talking about issues of sexuality.

“We feel that what is going to happen is that the international community will force the Caribbean to confront the issue of our attitude toward persons who are homosexual,” she said.

“And I will tell you, quite interestingly, I feel like I am best placed to have this conversation, because the prime minister of St. Vincent and the Grenadines decided that he would define my sexuality for me for the entire region,” Frederick said.

Her statement was an apparent reference to a comment Gonsalves made in the 2010 election campaign, namely, “Ah mean, Bayliss (Frederick’s father) would be a very unfortunate fellow if he send a daughter to study law, and came back and get a son, … a tomboy.”

“And it is interesting, because although I am not homosexual, I am defined as homosexual across St. Vincent and the Grenadines, largely, and I will say that as somebody who has had now to take up the battle of occupying a space where my sexuality is in question I think that a conversation needs to be had,” Frederick said.

She, however, said the conversation must also be a regional one, and not limited to her party or the ruling Unity Labour Party.

“The international community will force the conversation, because, pretty soon, financing, opportunities for us to get grant money will be denied, on the basis that our legislation doesn’t adequately address, but instead discriminates against people who are not heterosexual.

“So, I believe that while we can’t address the issue today, there will come a day when it will have to be the main conversation. While the women take the forefront today, we look forward to when the conversation changes so that we can address that issue,” she said at the event that focused on sexual and physical abuse of women in St. Vincent and the Grenadines.

Meanwhile, sociologist and historian Kathleen Robinson-Commissiong, one of the panellists at the event, said that the NDP, as a party, has not discussed the issue, but needs to have that conversation

“So one of the things I tell you is we keep talking about homosexuality is a choice,” adding that science and has established that “it is not much of a choice”.

You are born a certain way,” Robinson-Commissiong said.

She noted that some persons object to homosexuality, citing that the Bible refers to its as evil.”

Robinson-Commissiong, however, pointed out that the same Bible passages that describe homosexuality as evil also talk about all kinds of sexual sins, including adultery and fornication.

“Now, if we made those criminal offences, there will be nobody to prosecute anybody or keep them in jail, because there are so many people who are involved in both of those abominations,” she said.

St. Vincent and the Grenadines is among several Caribbean Community nations that criminalise homosexual acts.

Frederick, who is also the NDP’s public relations officer, said that her party is willing to listen to the various lobbies.

“We are also prepared to listen to other lobbies, so that if those persons who are directly affected by the issue of discrimination on the basis of sexuality, if those persons have organised themselves into groups and want locally to have their voices heard, the New Democratic Party will always have a listening ear,” she said.