Ecuador gave bridges out of its need, not ‘leftovers’ 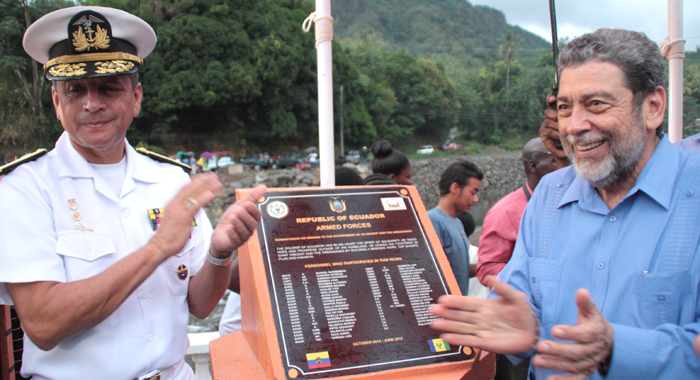 Ecuador has built four bridges in St. Vincent and the Grenadines notwithstanding its own need for bridges and other infrastructure, the South American nation’s Vice Minister of Foreign Affairs, Leonardo Arizaga said Monday.

The Vincentian government on Monday opened the Hope Bridge in Penniston, bringing to an end the eight-month mission of the Ecuadorian Army Corps of Engineers that also build three bridges in North Leeward, which were opened on Friday.

The bridges, along with the relevant river defence works, cost US$3.8 million dollars, and saw up to 100 Vincentians being employed.

The bridges have replaced those that were destroyed by severe weather in December 2013.

Prime Minister Ralph Gonsalves visited Ecuador last year and the South American nation decided to fund the construction of the bridges and to send its army engineers to do so.

Speaking at the opening ceremony on Monday, Arizaga said that when President of Ecuador Rafael Correa heard about the destruction of the bridges he made a commitment to Gonsalves to assist.

“President Correa said solidarity does not mean giving leftovers. It means giving what is missing. Admittedly, we lack resources in Ecuador. We lack schools, we lack hospitals, we lack roads, we lack bridges. But the Ecuadorian people will always have room for solidarity,” Arizaga said.

He noted that the team has also done humanitarian work in Haiti after the 2007 earthquake and in Cuba after a terrible storm.

“And we are sure they will go anywhere where they are needed,” said Arizaga, who thanked the soldier for their professional work.

“Along with the libertarian drive of our people, we share the awareness that only solidarity will allow us to overcome difficult times and promote the development of our nations. This conviction and this awareness are the foundation upon which we build bridges, like the Hope Bridge, the longest of this island, but also diplomatic, political and cultural bridges,” he said.

He told Gonsalves that both nations have to also build diplomatic bridges.

“In recent years, we held frequent meetings between our nations and in international fora. Moreover, we have accredited diplomatic representatives in both countries,” he said, adding that Quito is happy with the work that SVG Ambassador to Ecuador, Andreas Wickham, who is based in Venezuela, is doing.

“Nevertheless, it is likely that the most important bridge that we have created is the one that increasingly links the government and people of the south, because our place in the world and the challenges we face are similar. Because, in many ways, we share a utopian horizon that commits us to construct a better future for our people,” Arizaga said.

He said the southern hemisphere has opened new ways of interaction.

“South-south co-operation has appeared as an alternative partnership that respects the sovereignty and addresses the real needs of the recipients.

“Just like we deliver today this bridge along with two trucks used during the construction work, we also signed today a co-operation agreement that allow Ecuadorian teachers to learn English as a second language in St. Vincent and the Grenadines,” he said.

The agreement will see more than 40 Ecuadorian teachers coming to SVG to improve their English language skills and will also see five Ecuadorian diplomatic attached to the Ministry of Foreign Affairs in Kingstown and at the same time improving their language skills.

“Our collaboration is only starting. Ecuador offers the people of St. Vincent and the Grenadines our experience in production, in areas such as fishing, shrimp farming, banana exports and other products.

“On the other hand, Ecuador has a lot to learn from the great achievements of St. Vincent and the Grenadines in many sectors, among them tourism. These are just some of the areas where we could generate beneficial synergies for both countries,” Arizaga said.

“With concrete commitments from both parties, we can build and strengthen the relationship between our countries. Moreover, we can reassure the collective task of Latin American and Caribbean integration.”

Arizaga said he was aware that the countries of the Caribbean are particularly vulnerable to the harmful effects of climate change.

“We, as a brotherly nation, must show solidarity with our Caribbean brothers,” he said, adding that ultimately, the future of each country in Latin American and the Caribbean is the future of the entire region.

“Solidarity is not an option, it is a moral imperative and a strategic factor for the real integration of our nations in the global scenario,” he said as he welcomed the new stage in the Kingstown-Quito partnership and expressed hope that the relations between both government will grow in the future.

6 replies on “Ecuador gave bridges out of its need, not ‘leftovers’”