Ramos asks about UN money reportedly given for Garifuna people 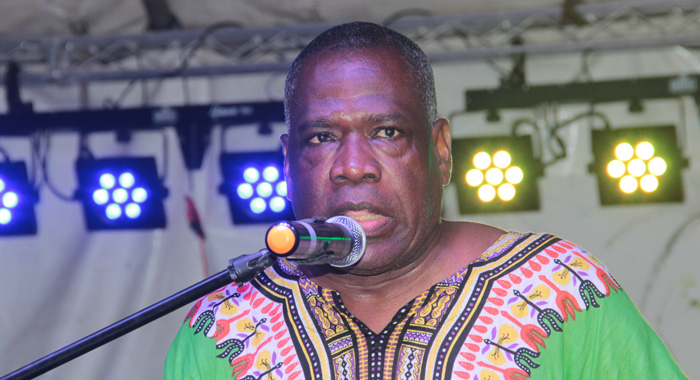 Visiting U.S.-based Garifuna leader professor Wellington Ramos has raised questions about money he said the United Nations gave to countries to improve the living conditions of their Garifuna populations.

“You all get any money yet?” he asked at the New Democratic Party (NDP) rally on Sunday in Sandy Bay, one of the areas where Garifunas live in St. Vincent and the Grenadines (SVG).

When the crowd responded no, Ramos asked where is the money.

“Well, something wrong ya. Unno (you) have to go find out bout this money,” the Belize-born professor of history and political science said.

He told the gathering that some Garifunas come to SVG all the time and meet with the government.

He, however, said that these leaders, who he did not name, do not report to their organisations and have no accountability but are living large “under the money that our people are supposed to get.

“So we have to stop that. Now, we go find out how much money these governments were getting and we didn’t get any out of it. Because they cannot be using our people to get money and we no get none. That has to stop,” Ramos said.

Ramos is in SVG for talks with the NDP, which announced earlier this year that it will grant honorary citizenship to all Garifunas.

Garifunas are descendants of indigenous Vincentians, some of whom were banished to Central America in the late 18th century, but have survived with their language and culture intact and regard SVG as their ancestral home.

He said that when he read the proclamation, it looked like a   cloudy mirror and he wrote to Gonsalves outlining the problems he saw with the document.

“The problems were simple: we were never slave…” Ramos said.

He noted that Gonsalves was seeking reparation on behalf of Garifuna people, adding, “But he never consult we.”

He said Garifuna will bring a case for genocide and other injustice carried out by Europeans against the Garifuna.

“That day is going to come. And when that day comes, the money that we get for our people we are going to make sure that Greiggs, Sandy Bay, all the Garifuna communities everywhere in the world get some money,” Ramos said.

He said that Garifuna people need to reconnect.

He said Garifuna have never been beggars as they have always been farmers and fisherman and we are independent people.

“You know what they are doing now? They are trying to come back to have us stay in a state where everything that we need we must go to them.

“You nah my daddy, you nah my ma. I don’t want no bottle with milk so why should I go to anybody?” he said, adding that dependent persons are controlled by those who provide for them.

“So we have to control our own destiny. And it is only when you control your own destiny people are going to respect you,” he said.

He said a person has to have the patience of a cow to continue waiting after 14 years for an unfilled promised.

Ramos said he met with Opposition Leader Arnhim Eustace for hours and found him to be “honest, sincere, genuine, and trustworthy”.

“A person that possesses those qualities is the person you need to be around you. Nothing with him is done in secrecy; he is open, and it was because of that I told my Garifuna association and I told the other Garifuna associations we need to start a dialogue with the New Democratic Party.”

Ramos said that the Garifuna association asked him what will happen is Eustace loses.

He said that he and Eustace spoke about a lot of things but this is not the time to talk about what they spoke about.

“Because it’s none of their business yet. And every time we say something people call me, people email me and they say something different from what I say,” Ramos said.

“I would like to see something where our people can come to their homeland and have some closure,” he told the gathering.