ULP says elections will be fought on 5 issues 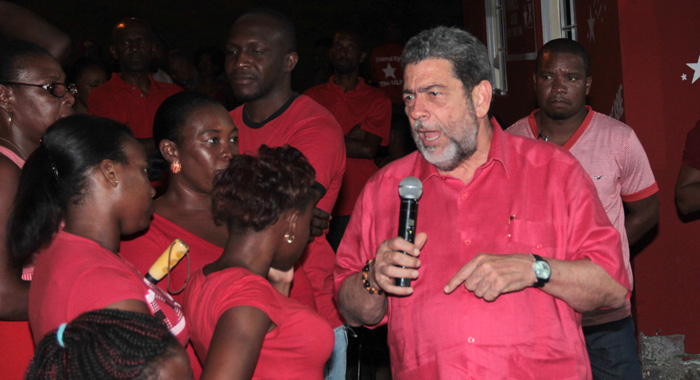 The ruling Unity Labour Party (ULP) has outlined what for it will be the five issues on which it will fight for a fourth consecutive term in office in the next general elections.

General elections are constitutionally due by March 2016, but Prime Minister Ralph Gonsalves, who is also political leader of the ULP, has said Vincentians will elect a new government before the end of 2015.

Gonsalves, speaking to party supporters in Lowmans Leeward on Saturday, said the elections will be fought on five issues: the ULP’s vision, philosophy, policies and programmes; its achievements; its candidates; political organisation and inclusiveness; and leadership.

Gonsalves said that the ULP’s achievements since coming to office in March 2001 “are simply impressive, particularly in a context where after 2008 we had the worst global economic crisis for over 100 years, and that crisis is still continuing, and since 2010 where we have had five serious adverse weather events, three of them major floods and disasters and two tremendous droughts,” he said.

He told the gathering at the opening of the party’s West Kingstown constituency office that the ULP’s achievements have been “truly impressive even in the most difficult set of circumstances not caused by us, but external to us, like the external situation and natural disasters”.

The elections, he said, are putting into focus the quality of candidate that they ULP has.

Gonsalves said the ULP’s candidates are “far better” than those of the main opposition New Democratic Party (NDP), which is expected to present the most serious challenge to the ULP.

“… it is difficult to think of any set of candidates ever offered which are better than what we are putting on offer for 2015 for the people of St. Vincent and the Grenadines.”

Gonsalves told party supporters that the elections are also about political organisation and inclusiveness.

“I want to say this to you: we can all attend the rallies, we can be very enthusiastic, the mood can be excellent, but unless you are registered to vote and we are organised in each constituency to make sure that every single Labour supporter goes to the polls, unless those things are happening, the crowd the mood, the spirit would not give you the victory,” Gonsalves said.

He told party supporters to ensure that they are registered to vote.

“And the fifth issue in relation to these elections is leadership,” Gonsalves said.

“You have never heard a leader of the opposition, in this case, Arnhim Eustace, when asked in New York — and the whole world heard him, where are your plans for the next 10 to 15 years, he got up, he said, … “Ask Ralph,’” Gonsalves said.

“And we are further elaborating those plans, as you will see in our manifesto when it comes out,” Gonsalves said.

The ULP holds eight seats in the 15-member Parliament and the NDP won the remaining 7.

The party will have the “pre-launch” of its election campaign today, Sunday, at Rabacca.