IADC maintains that Argyle airport will be operational by year-end 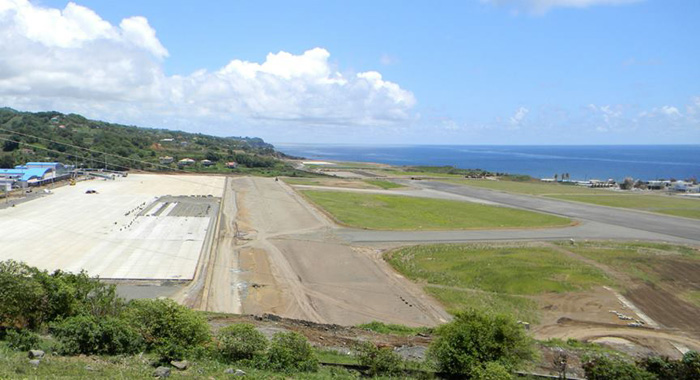 The Argyle International Airport, which has missed completion deadlines annually since 2011, will be completed by the end of this year, the state firm responsible for its construction said last week.

Head of the International Airport Development Company (IADC), Rudolph “Rudy” Matthias told the media on Thursday that the government wants to have the management team for the airport in place by November, ahead of the year-end operationalization of the airport.

The government has begun to advertise for the top-level positions for two state companies that will manage the airport.

The senior staff will help to put systems in place in November to have the airport ready for operations before year-end, Matthias said at an event where U.S.-based Vincentian donated US$10,000 to the EC$700 million project.

In giving an update on the airport, Matthias said that workers are finishing the retrofitting of the terminal building.

The construction of the terminal building was completed in December 2013.

The retrofitting includes the installation, which has been completed.

The conveyor belts are being installed and the Venezuelan supplier has trained airport staff on their use.

In the next week or two, the airport will receive the airline and Customs and other counters and desks, which will be installed in September.

Towards the end of September it will receive the public seating, Matthias said.

The cargo terminal is being constructed and is expected to be complete by year-end, he said.

“The weather, I am sure, is affecting the construction company there. But they assured us that they are trying their very best to get the job done by year end,” Matthias told reporters.

Regarding the earthworks, Matthias said the team has made significant progress so far and expects to complete the earthworks by the end of September.

“At least the earthworks within the fenced area,” he added.

The culverts that will channel the Yambou River under the runway have ben installed and the backfilling has started.

The strategy is to start in the centre and work outwards, so that once the work in the first 45 metres is completed, staff can continue to build the runway in that area while the back filling continues toward the two ends of the river channels, Matthias said.

The company will install gabion baskets on the Yambou River to ensure it flows though the river channels they have installed.

“The paving works are on-going. We are fighting the adverse weather conditions that we have in Argyle right now. We are trying our best to have the pavement works completed by the end of October, early November,” he said.

“The internal circulation roads are under construction but these are not on our critical path. It is not a lot of work to be done,” he told reporters.

“We are doing them but we do not see them as a problem in terms of completion by the operational date.”

Fencing work was started and as areas of the airport become available, they are fenced.

“The fencing work is very fast; not the two years that I heard someone say it will take to fence. I don’t know why in heavens fencing an airport will take two years. But it gives you an insight though into how some people think…” Matthias said.

He, however, said that all works at the airport will not be complete even when it becomes operational.

“But even as the airport is completed, though, and we begin operations, there will be some things that we will be doing outside of the airport fence. Things like rebuilding the segment of the Windward Highway where we had the road slippages … We have de-emphasised the work on that at this time and have scheduled that to be done after we have done the work to make the airport operational.”

He said the IADC will rebuild the old Argyle Bridge, which collapsed some years ago and will also construct an access road to Rawacou at the southern end of the runway, overlooking Stubbs bay.

Beautification of the slopes and embankment will happen after the airport becomes operational.

“So there will be some things going on out there. As everybody knows, there is no project that is ever finished. There is always something to be done after,” he said.

Matthias said that while the construction work is being done, the IADC is working on establishing the business side of the airport.

Vincentians will be invited again to enter into contracts with the IADC for shops and other businesses at their airport, he said.