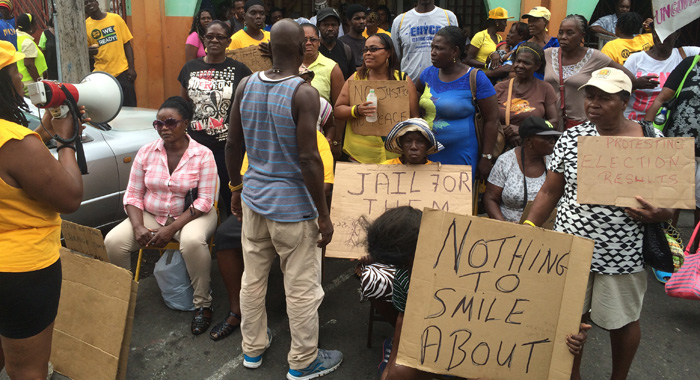 Activist Luzette King says that stealing an election is more like fixing a deck of cards than robbing a bank, and the first is what happened in the Dec. 9 general elections.

King has emerged as the de facto leader of protesters who have gathered outside or near the Electoral Office in Kingstown since the Dec. 9 vote.

Electoral officials have declared the elections won by the Unity Labour Party (ULP), which has been returned to office for a fourth consecutive term.

They say that the ULP won eight of the 15 parliamentary seats, while the remaining seven went to the main opposition New Democratic Party (NDP), a repeat of the 2010 election results.

But King told the media this week that the protesters believe the elections were stolen and this resulted in the 8-7 results against the NDP.

“Therefore, we contend that the people of St. Vincent and the Grenadines have been denied the chance of a fresh start with the Hon. Arnhim Eustace as prime minister. Instead, the nation is burdened with an illegal Unity Labour Party government,” said King, who is based in the United States.

“There is no doubt that elections can be stolen,” King said, adding: “Stealing an election is not the same as robbing a bank.

“A sitting government can use its position of authority to influence the outcome of an election before, during and after polling day and this is what happened while the unity labour party was in government.”

She said the best evidence is “to catch a candidate with boxes of unopened ballots, etc.

“Stealing an election is more like fixing a deck of cards, where one player is guaranteed to come out on top,” she said.

“As we have just seen here in SVG on Dec. 9th, 2015, the result of a fraudulent election can appear to be the same as one that is free and fair.

“So how can we tell that the will of the people is not reflected in the results of Dec. 9th, 2015 here in SVG? Why are we not going to allow a stolen election to be called legitimate?

“The ULP cannot prove to Vincentians and the world, beyond any doubt, that they did not steal the elections,” she said and went on to list untoward practised that she said the ULP was involved in, including the misinformation; misleading or confusing ballot papers and division of opposition support.

“Many of those people still have the supplies covered up and unused while others have been selling them to other people.”

King said that since the election there has been “a heightening of police brutality and the consequent denial of democratic rights and freedoms of many Vincentians who have gathered to protest peacefully.

“We have seen the arrest of Douglas De Dreitas, Shabaaz and Ben Exeter and myself. Interestingly, Ben Exeter contended these elections as an NDP candidate in the Central Leeward constituency and is currently challenging in court the results of those elections.”

King was arrested on Jan. 6 and charged with being a public inconvenience as a result of developments a police attempted to remove protesters from in front the Electoral Office.

“In fact, we also note what seems to be subliminal messages to the court and in this instance, the judgment denying the NDP access to inspect the ballot papers reflect in statements made on air. For example, the reference to ‘fishing expedition’ in the judgment is quite similar to that unity labour party suggestions,” King said in reference to a High Court judgement denying Exeter access to certain election-related documents.

“Further, there have been references made to the Public Order Act when discussing activities as they relate to our protesting these elections and other matters arising from them. This act does not apply to cases to Vincentians are demonstrating peacefully. In fact, this is an attempt to supersede Constitution!” King said.

She noted that the Constitution of St. Vincent and the Grenadines provides for the protection of freedom of expression, freedom of assembly and association and freedom of movement, adding that these same rights are also imbedded in the United Nations Charter of Human Rights.

“For our nation to move forward into 2016 and beyond, we cannot continue to allow any government to buy us out and when they can’t they resort to undermining our basic human rights as mentioned before.

“It is a most dangerous sign when a government has had to engage in wide scale corruption to win an election. The country’s resources belong to all nationals,” King said.