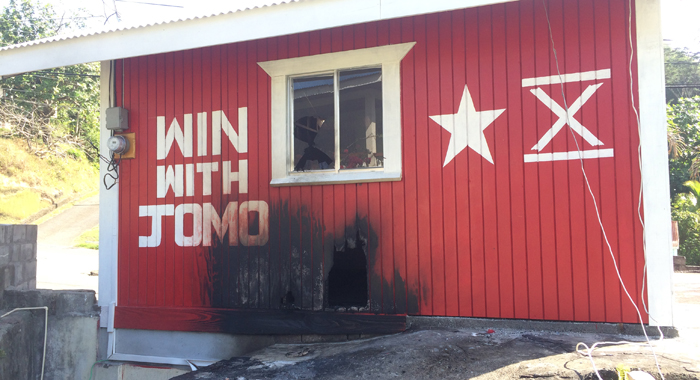 The fire damaged a section of the recently reconstructed building. (IWN photo)

The ruling Unity Labour Party’s (ULP) candidate for South Leeward in the Dec. 9 general elections, Jomo Thomas, believes that his campaign office in Chauncey is being targeted.

He came to that conclusion after the building was set on fire Friday night, four months after it was gutted by a blaze and rebuilt.

“It is a rather unnerving development,” Thomas told iWitness News on Saturday.

“I must tell you I find it really tragic that the elections are gone and there is still this, what may well be — and I don’t want to speak out of turn, but you know there is the old saying that lightning don’t strike twice in the same place, particularly in the space of four and a half months this office is burnt, which seems to me that the office is a target,” Thomas told iWitness News.

“And from both a personal and political level, it is quite concerning to me,” said Thomas, who is also Speaker of the House of Assembly.

Thomas told iWitness News that he was asleep when he received a call around 12:30 a.m. Saturday saying that the office was on fire.

“It was really shocking to me, realising it was on October 16th last year that that office was burnt,” he said.

Thomas, who lives in Campden Park, said that he went to the office building with his mother and campaign manager.

The office building is a two-storey structure, the ground floor of which is concrete and the upper section is wooden.

He said that when the building burnt on Oct. 16, there was a can of tar that was being used to seal leaks in the concrete roof of the ground floor of the building.

“The tar might have been used as an accelerant. As I explained to the police then, the can that the tar was in completely burnt,” Thomas said.

“And that oil structure was made of pitch pine, which is a very oily type of material, that might have helped in the acceleration of the fire,” he said of the original structure, which burnt last year.

The wooden section of the building was reconstructed using grooved plywood.

“So I guess it did not accelerate. Evidently, something was thrown into the window and when it went inside, it dropped on a chair. So part of the chair is burnt out, and it also caught a curtain. The curtain, for all intents and purposes, is completely burnt. The floor is scorched and there is a part under the window that is burnout as well,” Thomas told iWitness News.

He told iWitness News that he was at the office building on Thursday “because I still have a relationship with the people of South Leeward.

“I was there and I met with some people,” he said.

There has been a number of fire-related incidents in St. Vincent since the Dec. 9 elections, which the ULP won by eight seats to the NDP’s seven.

The NDP has rejected the results as fraudulent and has filed two election petitions.

In late December and early January, police say that there were two attempts to firebomb the corporate headquarters of state-owned electricity company, VINLEC.

Fire burnt a large amount of building material at the state-owned Public Works facility in Arnos Vale on Jan. 7.

Eustace fires back at Gonsalves over Public Works blaze comments