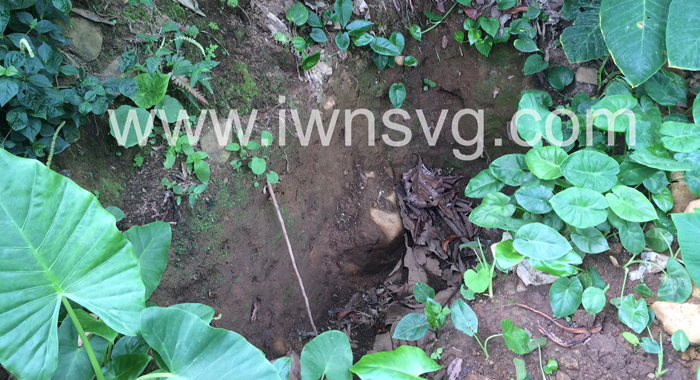 The man is said to have threatened to kill and bury the woman in this hole. (IWN photo)

Police are investigating a case in which a Vermont man is said to have abducted his ex-girlfriend and held her captive for three and a half months in a house a few hundred yards away from where her terminally ill mother lives.

The man is said to have used a combination of drugs and threats to keep the woman inside of a wooden enclosure on the ground floor of a two-story house, where he lives with his elderly, ill adoptive grandmother.

Another elderly woman, who is said to suffer from some level of mental retardation, also lives in the same house.

iWitness News understands that the 24-year-old woman was involved in a relationship with the man, but ended it towards the end of last year.

After her rescue Friday evening, she told villagers that she was nabbed on New Year’s Day, when the man told her to come to the house to collect something.

When she got there, the man told her that he would not allow her to leave.

Reports are that the woman was then locked into the wooden structure constructed on the ground floor of the house, where the kitchen is also located.

The structure has a door and a single window, which forms part of the house in which it is built.

The man is said to have used some sort of substance to drug the woman whenever he left the house for extended periods of time.

He is said to have taken away her cellphone and is said to have impersonated her on Whatsapp, using her account to convince her contacts, including her family, that she had gone to another Caribbean country.

Although the woman was not living with her mother, persons found it strange that she would leave suddenly while her mother is so ill.

The woman was rescued Friday, after another a villager who cared for the man’s adoptive grandmother found a note in an insulin container saying that the woman was being held in the room on the ground floor of the house.

The rescued woman told villagers that the man would allow her to come outside into the kitchen at nights and she was able to sneak the note into the medicine container in the refrigerator.

The woman found the note and police were notified and came to the house and made inquiries, at which point the missing woman was found.

After the woman was found, she told villagers that she had tried to escape through the window once, but was caught and the man then took away her clothes, leaving her in her panties only.

On another occasion, she was able to use her cellphone, which was locked, to call 911, but the call went unanswered and the man beat her when he found out.

iWitness News understands that the man had also threatened to kill the woman if his acts were found out and is said to have showed her a photo of a hole in the yard, which he reportedly told her was dug for him to bury her in.