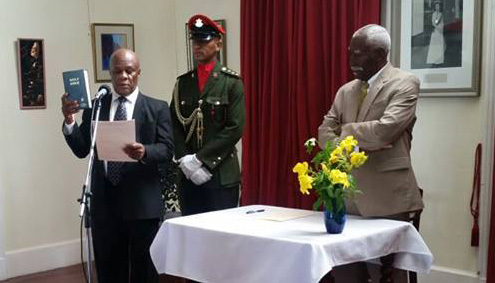 Former Deputy Commissioner of Police Bertie Pompey has been sworn in as temporary magistrate.

In his remarks, Sir Frederick extended congratulations to Pompey on his appointment, adding that he viewed it as progress and advancement for himself and his career.

The Governor General urged the new magistrate to be “fair and honest” in his judgment and to be prepared at all times to defend his actions and words.

The Attorney General endorsed the Governor General’s statement, adding that she was delighted to have the former law enforcement officer on board.

“It is very difficult in these times to find good lawyers who are willing to leave their private practice, lucrative as it may be to come to serve,” she said.

She said during his tenure as Deputy Commissioner of Police, Pompey was always willing to serve. She described him as an honest, fair individual with integrity.

“I am very happy that the Judicial, Legal Services Commission accepted the nomination for him to serve with us for a while.

Meanwhile, Baptiste told Pompey that she was looking forward to hearing excellent things about his service on the bench, adding that she was pleased that he had accepted after he was approached and the Judicial Legal Commission Services had given him this appointment within the judiciary.

Having served over 30 years in the Royal St. Vincent and the Grenadines Police Force, Pompey said it was a profound privilege for him to play a role in the upkeep of the Constitution and law and order.

“This is a responsibility that I do not take lightly, I will endeavour with utmost transparency and fairness to strike a balance between the rights and freedom of the individual on the one hand and that of the state in the maintenance of order in a dispassionate and objective way,” he said.

3 replies on “Former deputy police chief sworn in as magistrate”