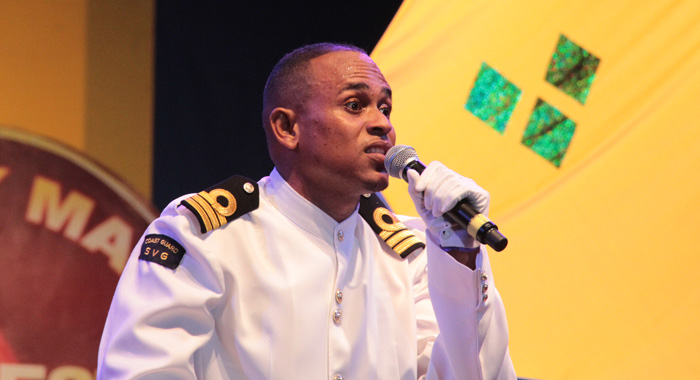 Zamfir “Man Zangie” Adams created history Sunday night by becoming the first artiste to win the National Calypso Monarch crown three times in a row since the change over of Vincy Mas to June-July 39 years ago.

Adams, a police officer and talented singer and performer, won the crown singing “Faith in Hairouna”, a song celebrating SVG and “Access Denies”, a composition highlighting and decrying pedophilia.

For the third consecutive year, veteran Robert “Patches” King had to settle for silver, though he moved sections of the crowd with his popular, up-tempo “Labour Love” and an equally powerful social commentary, “Something Wrong Wid We”.

Ahead of his delivery of “Labour Love”, Patches complained to patrons that the Carnival Development Corporation (CDC) and their lawyer was not allowing him to show on the big screen two slides of photos that are “in the public domain” as part of his presentation.

But after his performance Colin Williams, who was one of the MCs, explained to patrons that all calypsosians had to — and had agreed — to bring their multimedia content to the CDC — apparently for vetting by their legal advisors – at least four days before the competition.

Third position went to Roland “Chico B”, Veira, the reigniting calypso Monarch in the British Virgin Island, where he is based.

Chico B won the patrons’ heart with his humorous Rum Pipe, which also addressed current affair issues, and “Horner Man”, a song in which a man sees his wife infidelity as beneficial.

Veteran calypsonians Kenneth “Vibrating Scakes” was fourth with is political commentaries “Revolution” and “Stop Looking in the Wrong Direction”.