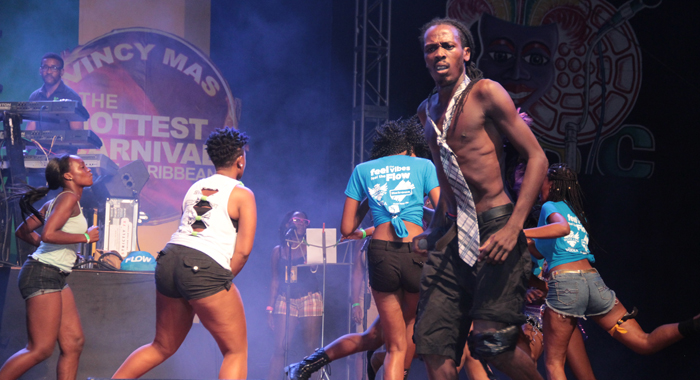 After 4000 was announced winner of the competition on Sunday, theories began to emerge that Skinny had secretly teamed up with 4000 in an effort to increase his chances of winner.

The conspiracy, or so the theory goes, is that Skinny also decided to follow through on his announcement one year earlier that he would stay out of the competition, expressly with the intention of increasing the chances of Hypa 4000 or another artiste beside Fireman winning the show.

Fireman has won the Soca Monarch crown more than any other artistes, with Skinny Fabulous in second place.

But some soca lovers have also argued that upcoming artistes must not be shooed-in but must work hard on their craft and defeat the current champions — as Fireman and Skinny did.

Fireman placed third in the competition Sunday night, while

It is not clear how the conspiracy theorist explains Wiz Skid’s performance.

4000 said that Skinny helped him “mentally” in his preparation of his presentation, some elements of which, patrons say, closely resembled a Skinny presentation from a few years ago.

Asked if there was any such plan to ensure that Fireman did not win, Hypa said:

“A plan? I doh know about that though.”

He, however, went on to acknowledge Fireman’s contribution to revolutionising the Soca Monarch competition.

“Fireman them came, as they say in the day, with a bedroom studio, won soca monarch, set the way for other little bedroom studies like Fourth Dimension and all of us so we could record and be independent and reach where we are today. So, big up Fireman, big up Fireman Hooper,” 4000 said.

Iroha, who also arranged the winning Ragga Soca song — Chiwalee Johnson’s “Rumist” — also denied being involved in a plan to ensure that Fireman did not win.

“Even long before we had this song, Skinny already said that he was going to stay out since his last win,” Iroha said.

He said that Skinny wanted to stay out since 2014 — when he lost to Fireman after being booed by patrons even before he appeared on stage — but came back in 2015 to try to recapture the crown “to go out on a high”.

Last year, in addition to winning the Power Soca crown, Skinny won the Ragga Soca title on his first attempt.

“So, this isn’t anything that was planned,” Iroha said, adding, “but, at the time, much props have to be given to Skinny because he passed on a lot of knowledge, a lot of support. Without him, we won’t be standing here right now celebrating this.”

Skinny took to social media Sunday morning to congratulate Hypa on his victory, shortly after he was announced winner.

Skinny wrote: “We Stay Winning !!!!!! we went through nights of planning, no sleep and hard work to prepare this presentation. Congrats hypa 4000 congrats Lester Iroha”.

And, as for Fireman, the Soca Monarch competition has not seen the last of him.

In post made on Facebook Sunday evening, Fireman promised even more soca throughout the year, announced that he will be back in the competition next year, and congratulated this year’s winners.

“I want to thank all the fans for your support last night and throughout my career. I love you all a million and thank you making Fireman Hooper what he is today. Am Looking forward for your continuous support in the future. You’re definitely (sic) gonna see more of me throughout the year. Lots of new songs, collaberations (sic) and performances regionally and internationally. I want to say to congratulations the winner Hypa 4000 and all the other artiste(s) that took part in the show,” he said.

One reply on “Hypa 4000, producer denies plotting with Skinny to defeat Fireman”