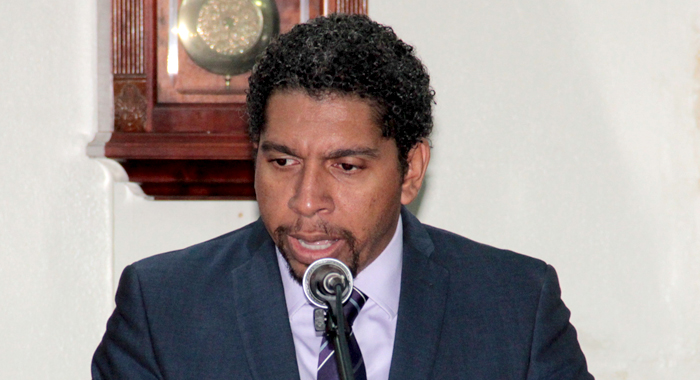 Minister of Information, Camillo Gonsalves says it is not enough to tell children to toughen up in the face of cyberbullying.

In debating the Cybercrime Bill before its passage into law on Friday, Gonsalves told Parliament that he has read a number of articles from peer-reviewed psychology journals, which do not see cyberbullying the way he says the opposition sees it: “that you must toughen up; bear it.

“They say that cyberbullying is fundamentally different from traditional bullying,” Gonsalves said of the journals.

He said issues like anonymity, inability to see the victim or the perpetrator, its pervasiveness, the fact that cyberbullying can happen anytime and the audience differentiate cyberbullying from bullying offline.

He quoted from the journal article “Following you Home from School: A Critical review and Synthesis of Research on Cyberbullying Victimisation”, which says that girls are more likely to be victims of cyberbullying.

Some of the academic problems that result from cyberbullying include a drop in grades, absences, truancy, carrying weapons to class, depression, social anxiety, depreciated levels of self-esteem, detachment, and suicide.

Gonsalves said he listened to the discussion about rights but didn’t hear about the rights of the child, adding that international conventions say that children should be protected against physical and mental violence.

“It’s amusing that I hear don’t deal with these thin-skinned people, as if we are dealing with survival of the fittest,” he said, adding that the responsibility of the government is to protect the most vulnerable.

Gonsalves said that close to 100 per cent of adolescents in St. Vincent and the Grenadines have access to internet.

He said that the 2015 RBC Young Leaders programme was about digital citizenship and the students were deeply concerned about cyberbullying and harassment.

He went to them with a message of not being afraid of the internet but they came telling him about the text messages they get, said Gonsalves, who is also Minister of Industry.

“And this concept that they must toughen up — You know, sometimes, we must not look at legislation to protect children through our eyes as adults or worse, through our eyes as politicians who are in the field of combat. We must try to consider what’s happening to children and not speak so flippantly,” Gonsalves told lawmakers.

The opposition did not support the bill, saying — like regional and international freedom of expression proponents — that it will have a chilling effect on free speech.

The opposition also said that the penalties in the bill — which are as high as EC$500,000 — are excessive.

Gonsalves, however, said the opposition was mentioning the fines and suggesting that if a person were convicted of an offence under the law they would be charged the maximum amount.

“That is not the prescribed penalty. It is not the minimum penalty; it is the maximum. And the court can charge anything from zero to that number,” Gonsalves said, adding that the select committee that reviewed the bill, reduced all of the penalties that were in the original draft.

The opposition, which was boycotting parliament in protest of the December 2015 election results, did not participate in the select committee.

Gonsalves said that the rules of the House of Assembly mandate that the select committee shall reflect the composition of the House.

He noted that Leader of the Opposition, Arnhim Eustace, in debating the bill, had spoken about duty.

Gonsalves said it is part of the duty of the opposition to show up to Parliament and do their job.

“This country’s governance…, no government is improved by an ineffective opposition. And a hapless display of an opposition that is either incapable or uninterested in doing its job is not useful to this Parliament, to this government, to this country, and, certainly, not to this bill.”

To illustrate his point about the fines, Gonsalves, a lawyer, referred to the Drug Prevention and Misuse Act.

“We know about marijuana cultivation in St. Vincent and the Grenadines, where it occurs, how it occurs. Does anyone stop to think about what the penalty for ganja is, according to the law in this country?”

He said the law says that on summary conviction, a person can be jailed for six years and charged EC$400,000. On indictment, the maximum penalty is 25 years in jail or a fine of EC$1.5 million.

“That’s the punishment for growing ganja in this country you know. But when is the last time you heard anybody get sentenced to 25 years or 1.5 million for growing ganja. It doesn’t happen because we have judges and a judiciary that evaluate the facts and the law and makes appropriate charges…”

There have also been concerns that the bill also expands criminal libel to expressions online.

He further pointed out that it remained in the criminal code during the New Democratic Party administrations from 1984 to 2001 and has remained there under his Unity Labour Party, which was elected in 2001.

Gonsalves, who is also a trained journalist, said that criminal libel would be on the law books whether the bill passed.

“Don’t let anybody feed you and say we are introducing criminal libel. It exists in the law,” he said, even as he told lawmakers it is good to have a conversation regarding whether criminal libel, which has fallen into disuse, should be abolished.

5 replies on “Info Minister outlines impact of cyberbullying on children”