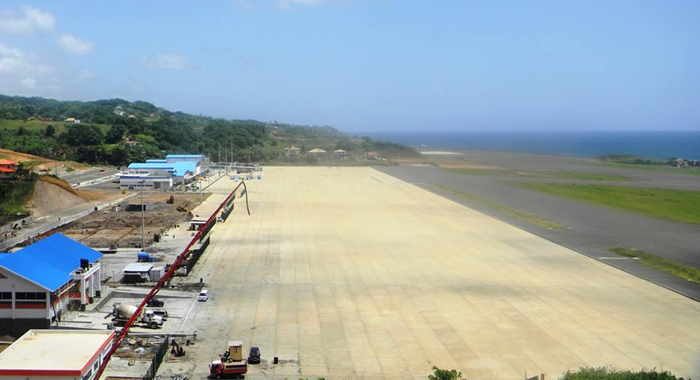 The Government of St. Vincent and the Grenadines has made “great progress” in its negotiations with four international airlines interested in flying to the Argyle International Airport when it is completed.

Prime Minister Ralph Gonsalves made the disclosure at a town hall meeting with Vincentians in New York on Saturday, two days after he told the media in St. Vincent that the construction of the long-delayed project is “winding down”.

“In so far as the airlines are concerned, international airlines, Glen Beache is heading the operations in that regard and he is reporting to me and I can tell you we have made great progress with one, two, three, four airlines. There’s a fifth, which we are working with. LIAT has come in and looked at the operations and also Caribbean Airlines,” Gonsalves said in New York.

Beache is chief executive officer of the Tourism Authority in Kingstown.

Gonsalves further sought to put to rest allegations that the U.S. Federal Aviation Authority would not grant permission for U.S.-registered airlines to fly to Argyle international Airport.

“But a plane which is registered in Barbados can’t fly direct to Puerto Rico,” Gonsalves said.

At last week’s media briefing, Gonsalves reported that “the construction phase of the airport is being wound down”.

He said there are “a few things still to be done” at the EC$729 million airport.

The airport is yet to become operational, five years after the initial deadline and almost a year after a LIAT aircraft landed there as part of a rally of Gonsalves’ Unity Labour Party, that critics say was intended to drum up support for the party ahead of the December 2015 general election, which the party one by one seat to secure a fourth consecutive five-year term in office.

“And the operational phase of the airport is very much our focus and that is why the Argyle International Airport Company, which is the operational company, the chair of which company is Garth Saunders, is very busy at work putting all the systems in place.

“We have hired some critical personnel, some major personnel and they are recruiting other persons. We’ve put some money to the AIA so that they can get on with their business.”

He said that the team headed by Beache is in conversation with the international airlines.

“We have had visits from a couple of them. LIAT was here; they visited the airport because LIAT has to move pretty soon its operations from Arnos Vale to Argyle. And I’m satisfied that we are pretty much in the winding stage of the construction and we are in the start-up phase of the — putting things in place for the operation of the airport,” Gonsalves said.

He said resources have been and were being mobilised for the operational phase of the airport, adding that Petroleum company, Rubis, was almost finished with the fuel farm.

“And a number of systems are being put in place for this very complex operation. I just want to say this: I have heard the mockery and the taunt by those who never supported the airport. It has been delayed. I explained the reasons for delay already. Perhaps, some of the timelines were gave were overly ambitious,” he said.

Gonsalves said people tend to forget that before his government came to office — in March 2001, “nobody knew how to build an international airport, and we built it”.