FEATURE: Caribbean youth making use of opportunities in agriculture 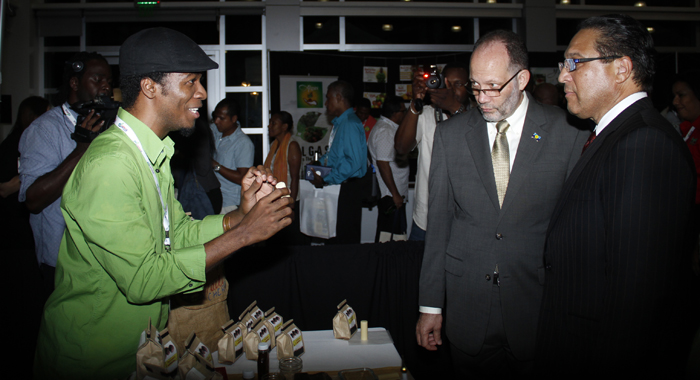 Haitian Jean-Sebastien Duvilaire, left, of Tahomey shows off one of his products to Secretary General of CARICOM, Irwin LaRocque, centre, and Premier of the Cayman Islands, Alden McLaughlin at Caribbean Week of Agriculture 2016 Agriculture MarketPlace in Grand Cayman on Oct. 26. (Photo: Kenton X. Chance)

Among his concerns was the impact of the Category 4 storm on cocoa cultivation in Haiti, where the hurricane ravaged the agricultural sector, in addition to leaving at least 500 persons dead and another one million in need of on-going assistance.

Duvilaire runs Tahomey, a cocoa processing company that employs four other persons and provides on-going income for about 50 farmers.

After the hurricane, his mother sent him some photos of the cocoa cultivation which he was about to reap for this year’s processing.

“My heart was broken and I was very confused for two, three days,” he says at his display the Caribbean Week of Agriculture (CWA) 2016 Agriculture MarketPlace which ran from Oct. 26 to 28 and which provided stakeholders in the agricultural sector the opportunity to meet and network with potential customers, prospects and partners, while showcasing their products and services.

“This season I lost all my cacao, so this season is going to be very difficult for us,” the young businessman says.

Duvilaire is owner and founder of Tahomey Chocolate Company, an idea born when he was studying chemical engineering.

Tahomey’s main product is 100 per cent natural cocoa powder from Abricots. Duvilaire says one of the great things about the product is that 80 per cent of it is Criollo cocoa bean, which has been described as being to chocolate what the fine Arabica bean is to coffee.

“It’s one of the best cocoas for any chocolatier from anywhere in the world in terms of quality,” says Duvilaire, whose Tahomey products include cocoa butter, chocolate, chocolate beverages, and cocoa syrups.

“Since in Haiti, deforestation is a big problem and cocoa, in our culture, grows under trees, the idea was to make money with cocoa to also protect the other trees that shade that cocoa,” he says.

Thankfully, Hurricane Matthew did not affect the north of Haiti and Duvilaire plans to source beans from Cap-Haïtien for his processing this season.

“I hope that next season we will get the same quality bean because my region [produces] special quality beans and we make really good cacao so I am hoping to get back to our beans by next season,” he says.

The Caribbean Community (CARICOM) Secretariat and the Inter-American Institute for Cooperation on Agriculture (IICA) facilitated Duvilaire’s participation in the exhibition. Like CARICOM and IICA, the Technical Centre for Agricultural and Rural Cooperation (CTA) believes that dynamic value chains can help to drive agricultural development in the Caribbean.

CTA has drawn up a three-year programme to develop value chains in the region, with expected direct benefits for up to 3,000 Caribbean farmers.

CTA, a joint agency of the European Union and the African, Caribbean and Pacific (ACP) group of states, is helping small-scale producers and other players in value chains to become organised and upgrade products, processes and productivity to match market demands.

As a result of the efforts of CARICOM, IICA and CTA, smallholders have significantly improved their chances of profiting from domestic, regional and international markets, including the flourishing tourism and hospitality trade.

Another such person is 31-year-old Dominican, Kamarsha Sylvester, who graduated from the University of the West Indies in 2013 with a bachelor’s degree in psychology (major) and international affairs (minor).

Sylvester is owner and production director of “Taste of Eden”, a business located in Paix Bouche, a village in Dominica.

“In our green seasoning, we have all types of herbs and spices,” she says, listing among them basil, thyme, celery, parsley, onion, and garlic.

“If you want to marinate your stuff properly like a real Caribbean national, then you go for taste of Eden Green seasonings,” she says enthusiastically in her sales pitch.

The idea of an agribusiness was first floated light-heartedly when Sylvester was still a university student in St. Augustine, Trinidad.

Before exams, she and some friends were discussing what they would do while waiting for responses to job applications.

“And just for fun, I said, ‘Man I will go and plant some herbs.’ I wasn’t serious. I will tell you that for sure,” Sylvester recounts.

But what she said in jest soon became a reality.

“I planted a lot,” Sylvester says, adding that the idea of turning her produce into tea bags and seasoning came about because she needed market for the produce.

“… the majority of the contents within the green seasoning and the tea are grown by me because I am a farmer,” she says proudly.

Sylvester sees a lot of potential for her business, saying that the trend towards health-conscious consumption makes her marketing easier.

“And everything in there is home-grown; no fertilizer. So we are talking about organic fertilizer going to the people so people gravitate towards that,” she says of her products.

The young entrepreneur was especially grateful for the training she received in an IICA-organised workshop in January, at which time, her packaging amounted to putting the tea products into tea bags imported from Canada then into a transparent plastic bag, which she said “sucked”.

“The truth of the matter is that it wasn’t so appealing. So, I was proud of my product, but I wasn’t proud of my packaging.”

In March, she went to another workshop organised by IICA, CARICOM and the Intra-ACP Agricultural Policy Programme (Intra-ACP APP) — which focuses on the Caribbean and the Pacific and aims to address the common problems faced in the two regions by targeting specific issues related to agriculture development.

After the workshop, Sylvester was able to secure professional packaging from Carolyn Chu Fook, who helped with design of a logo and label.

In addition to her agribusiness, Sylvester is a trained community tourism officer and is also an electrician, which also helps to supplement her income.

She says that her business is not yet at the point where she can live solely off its earnings.

But she is optimistic.

“The plan is to take over the Caribbean, the region, the world, one box at a time, one bottle at a time. So far, it is going good because, now, I am not in Dominica. I am in Cayman Islands,” she says.

In his corner of the exhibition, Duvilaire has similar ambitions.

Next year, he plans to prepare a product for the Caribbean, adding that Tahomey will begin marketing chocolate crèmas — a sweet and creamy alcoholic beverage native to Haiti — to distribute to the Caribbean

“That is the goal. So, I am really hoping that everybody around will be looking out for that brand: Tahomey from Haiti,” says Duvilaire, whose business sells its products primary in the Haitian capital, Port-au-Prince, but is preparing to expand into Boston, United States in January.

Secretary General of CARICOM, Irwin LaRocque, is pleased and says the region must encourage young people to become involved in “a modernised agricultural sector”.

“You are having an aging population in agriculture so that’s one of the reasons we have programmes in the CARICOM Secretariat with our partners to identify young people and give them some coaching on entrepreneurship in all its spheres but also in agriculture.”

He says this is also a way of addressing the issue of high unemployment among the region’s youth.

“And you know our young people are very creative and very innovative as well. So they bring ideas,” he says, noting the range of products on display.

“All they need is encouragement, the right boost, the right push in the right direction and they will take off. This is the future of our region, and, like I say, the future is now and we have to keep them involved in all that we do,” LaRocque says.

One reply on “FEATURE: Caribbean youth making use of opportunities in agriculture”