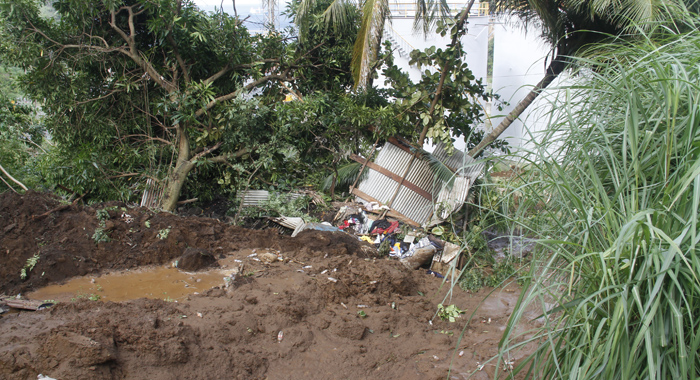 The remnants of the wooden house, several hundred feet from where it was built. (IWN photo)

A massive landslide Thursday night destroyed a house in Buddy Gutter, near the VINLEC power station and fuel storage facility in Lowmans Bay.

No one was in the house at the time, Emmanuel Marshall, whose parents and brother had moved out one day before, told iWitness News.

(Scroll for our video interview with Marshall.)

Marshall, a nursing student who lives at another house in the village where he is housesitting for a friend, said his mother, father and brother had moved out of the one bedroom, wooden house on Wednesday when cracks began appearing around it after Tuesday’s heavy rain.

The rains, which resulted from a trough system, caused flood and landslides across the country and damaged at least 38 houses.