Linton against persons joining NDP because of the leader 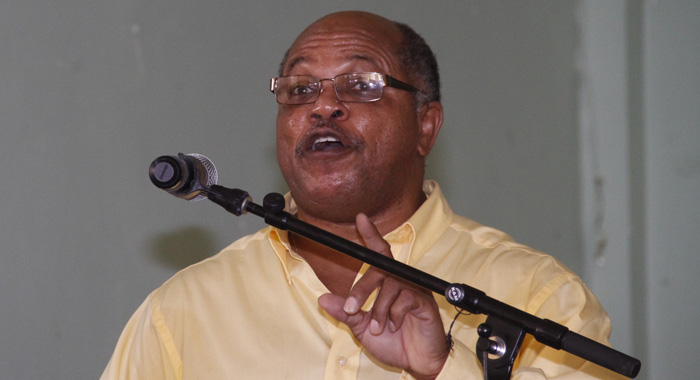 Chair of the main opposition New Democratic Party (NDP), Linton Lewis, has criticised party members who say that they only joined the NDP because of the leader.

In a speech that some NDP supporters dismissed as axe-grinding and blaming others for his four electoral defeats, Lewis told the NDP’s extraordinary convention on Sunday that the party’s constitution, rather than the leader is “supreme”.

“There are times when we have heard some people say, ‘Because of Arnhim Eustace I joined the party.’ Those who make that statement always invoke concerns about their sincerity and intentions and for the most part they demonstrate by their conduct little or no commitment to the New Democratic Party,” Lewis said.

The convention was called to elect a new leader, after Arnhim Eustace, MP for East Kingstown, stepped down as NDP president and Leader of the Opposition earlier this month, after 16 years.

MP for the Northern Grenadines, Godwin Friday, until his elevation, one of the NDP’s two vice-presidents, became leader of the NDP on Sunday after the other candidate, St. Clair Leacock, the other NDP vice-president withdrew at the last minute.

Lewis noted to the gathering at the NDP’s headquarters, Democrat House, in Kingstown that it was the NDP’s constitution that gives delegates the power to choose the party’s leader.

“Therefore, it is the constitution and not the leader who is supreme,” Lewis said.

His comments came among mutterings among some delegates that the speech was a campaign delivery ahead of next year’s convention, should Lewis choose to stand for re-election as the party’s chair.

If Lewis seeks another term as the NDP’s chairman, he will face at least one challenger, Daniel Cummings, MP for West Kingstown, who has already signalled that he will make his third attempt to become the party’s chairperson.

Lewis had narrowly retained the chairmanship of the nation’s oldest party in a three-way challenge that included then NDP member Anesia Baptiste, who has since left the NDP and founded the Democratic Republican Party, and MP for West Kingstown, Daniel Cummings.

When faced another challenge from Cummings at the NDP’s last convention, the vote ended in a tie and Cummings withdrew, saying that since Lewis was the incumbent and wasn’t defeated, he should continue in the role.

Some NDP supporters believe that some of Lewis’ comments on Sunday were aimed at Cummings, who has repeatedly said publicly that he joined the NDP because of Eustace.

Sources in the know tell iWitness News that NDP supporters are displeased with Lewis’ performance and are likely to vote against him en masse in next year’s general convention, should he stand for any position.

Among other things, they say that he has failed to attend important party events, including one last week in East St. George, where he made his last three attempts to win a seat.

Further, party insiders say Lewis is yet to travel around the constituency and use a public address system to thank those constituents who voted for him in the December 2016 general elections.

Leacock, the NDP vice-president, told a recent NDP press conference that Lewis had asked for some time off from party matters to focus on personal matters.

Lewis, a lawyer and accountant, had said earlier this year that his future in politics is now uncertain and hinted at this again on Sunday, saying he was preparing “to open another important chapter in my life”.

It is, therefore, not yet clear if he would seek re-election as NDP chairman or will run for any other position on the executive.

At the convention, Lewis said that when people say they only joined the NDP because of the leader, “they ignore the noble existence of the other candidates and disrespect the power and authority that was given to you, the delegates and other members of the New Democratic Party.

“The makers of that most unfortunate statement will never recognise or accept the decisions that you make at the annual convention especially if it is not consistent with their own intentions,” Lewis said in the speech in which he told delegates that they are not “voting cattle”

He said a statement about joining a political party because of the leader “is normally the starting point for the erosion of the institutions of the party and an infection of the authority of leadership which can lead nowhere but to confusion, strive and ultimately, disunity”.

Lewis said the NDP’s constitution, being supreme, outlines the principles upon which a person becomes a member of the party.