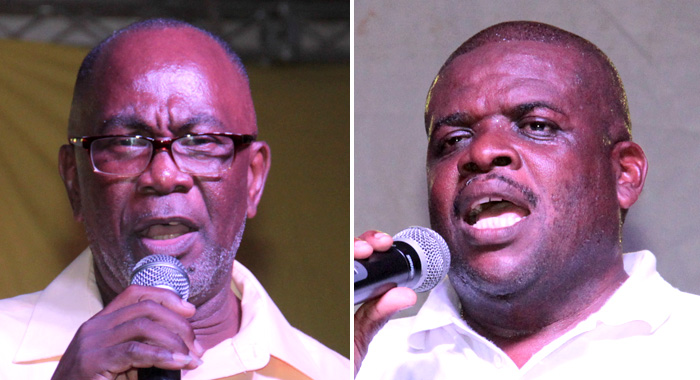 There are two vice-president positions up for grabs in the NDP, and so far, Leacock and Matthews have expressed interest. (iWN photos)

Vice-President of the New Democratic Party, St. Clair Leacock, says he is “very confident” that he will retain that position when the party holds its annual convention in Layou on Feb. 12.

In a Facebook Live interview with iWitness News this week in which he was critical of other NDP lawmakers over their failure to submit questions for the government to answer, Leacock denied considering joining the Unity Labour Party (ULP) government after he failed to become NDP leader last November.

He maintained that he has a “cordial” relationship with fellow opposition lawmakers and continues to make interventions in the interest of the party.

The NDP’s constitution provides for two vice-presidents, but Leacock is the only holder of that post after Member of Parliament for the Northern Grenadines, Godwin Friday, was elevated to opposition and party leader last November.

Leacock, who was contesting for the party leadership, dropped out of the race just before the position was put to a vote.

He told iWitness News that he is aware that MP for North Leeward, Roland “Patel” Matthews, will also vie to become an NDP vice-president.

“I am serving now and I anticipate that the New Democratic Party would exercise good sense when it comes to the next convention in choosing their vice-presidentship,” Leacock said.

He suggested that he had accepted the outcome of the leadership transition — which Friday won although many political observers had thought Leacock’s triumph was a foregone conclusion.

“I have no objection against the democratic process because that is the name of the party — the New Democratic Party. So anybody should be free to contest the elections. And once I’ve been elected back to serve as a vice president, I would continue to give them my service.”

Asked if he was confident of re-election as an NDP vice-president, Leacock told iWitness News:

Leacock said there is “no friction” between him and the other members of the NDP’s parliamentary caucus subsequent to the leadership transition.

He said he has attended every session of the parliamentary caucus and has made himself available to be of help to the party and has made certain suggestions about strategy.

He said that it was his suggestion that the convention be held in Layou “for strategic reasons”.

The NDP is maintaining that the ULP stole the vote in Central Leeward, where Layou is located, and North Windward in the December 2015 general elections to retain a fourth consecutive term in office.

Leacock said he was glad to see that his suggestion that the convention be held in Layou was taken on board.

He was, however, not optimistic that another suggestion of his would carry.

Leacock would like to see the NDP abandon the two vice-presidents and have a leader and deputy leader — like the ULP — and has asked the chairman of his constituency division to make the recommendation.

He said with such an organisational chart, things are very clear and some of the “fracas” that the NDP had after the leadership transition last November is not repeated.

“Apparently, it would not be carried but I think that is a very important development we could make with respect to our constitution,” Leacock told iWitness News.

Sources have told iWitness News that Leacock’s constituency council threatened to withdraw support for him if he crosses the floor, when he reportedly told them that he could better serve them if he joins the ULP government.

But Leacock denied ever considering crossing the floor.

“I don’t see why I should discuss it when that has not arisen. I haven’t given any consideration to crossing the floor,” he told iWitness News.