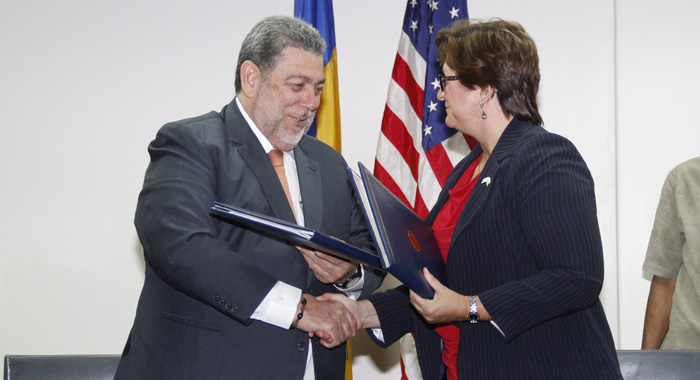 A new air transport agreement between St. Vincent and the Grenadines (SVG) and the United States came into effect on Friday, replacing one that London signed with the Washington in July 1977, when Kingstown was not yet an independent capital.

Ferencevych said the agreement “deepens and confirms our strong bilateral ties and the respect and the goals that we have in deepening economic cooperation and continuing to promote market forces and deepening of our relationship.

“The agreement is very progressive. The fact that it replaces a more stringent agreement from 1977 really opens up opportunities both for St. Vincent and to the United States, not only in passenger traffic but in commercial traffic as well that we hope will truly improve our economic and certainly our bilateral relations”.

The rights that each party granted to each other under the agreement were not disclosed at Friday’s event.

However, under similar agreements that the United States has signed with other Organisation of Eastern Caribbean states, each party grants the other the right to fly across its territory without landing, the right to make stops in its territory for non-traffic purposes and the right to perform international air transportation between points on certain routes.

Speaking at the ceremony, Gonsalves noted that the agreement enters into force when signed.

He further pointed out that it supersedes the agreement signed between Britain and the United States in 1977.

“This is before we became independent and Britain was responsible for our external affairs,” Gonsalves said.

He said that after SVG became independent, the law in relation to international relations that treaties entered into force by the United Kingdom on the SVG’s behalf remain in force unless they are specifically repudiated and renegotiated.

Gonsalves said the preamble of the air services agreement address “our joint desire to promote an international aviation system based on competition among airlines in the marketplace with a minimum of government interference and regulation;

“Desiring to make it possible for airlines to offer the travelling and shipping public a variety of services and options, and wishing to encourage individual airlines to develop and implement innovative and competitive prices

“We have agreed a number of things and we are granting certain rights to each other’s aircraft, the matter of how the authorisation proceeds, the revocation of that authorisation in certain circumstances, application of laws, safety; very important the question of aviation security,” he said.

Gonsalves noted that the matter of aviation security has been in the air because of the recent visit of the Transportation Security Administration (TSA) to audit the AIA, which opened on Feb. 14.

He reiterated that the TSA doesn’t “pass” or “fail” any airport, but ensure that they work in partnership with the other entities to have the highest standards of aviation safety and security possible

The prime minister, who is also minister of civil aviation and national security, read a number of paragraphs under Article 7 of the agreement, which speaks to “Aviation Security”.

He said he wanted workers at the AIA to pay special attention to paragraph 4 “so that all the people who are working out at Argyle and at all other airports to hear and understand this with clarity” — in light of the visit by the TSA.

“Each party agrees to observe the security provisions required by the other party for entry into, for departure from, and while within the territory of that other party and to take adequate measures to protect aircraft and to inspect passengers, crew and their baggage and carry-on items, as well as cargo and aircraft stores, prior to and during boarding or loading. Each party shall also give positive consideration to any request from the party for special security measures to meet a particular threat.”