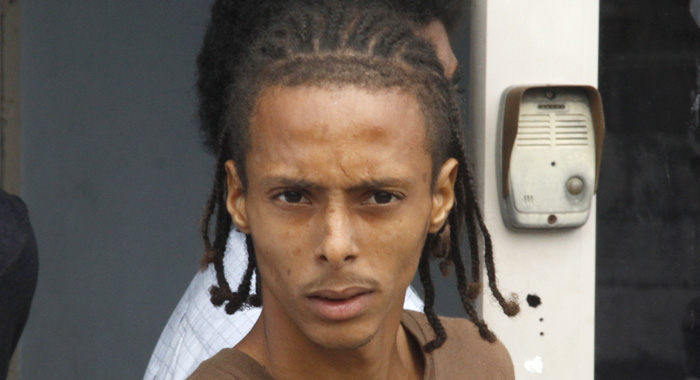 A Redemption Sharpes youth who, on Friday, told the court that he had found the homemade firearm he had in his possession was sent to jail for three years.

Jaleel Smith pleaded guilty to a charge of possession of a homemade firearm when he appeared before Bertie Pompey at the Kingstown Magistrate’s Court.

He was charged just over a week after he was found with the firearm on Aug. 15 in the Central Kingstown community.

The court heard that police officers in plain clothes were on patrol in the area when they say Smith, who is in his late teens, was walking with a CamelBak pack (hydration pack) on his back around 9:10 p.m.

This aroused the police officers’ suspicion and they stopped Smith and requested a search, to which he consented.

The firearm was found in the hydration pack.

A police firearms expert concluded that the firearm was capable of firing 12-gauge ammunition.

Asked what he had to say for himself, Smith told the court he had “real plenty to say and I am only speaking the truth by God word”.

The magistrate advised him to say only what was relevant to the proceedings.

The youth told the court that he and his brother had gone to an area of the community to use a wifi hotspot earlier that evening.

He said that as he was walking with his head down, paying attention to his phone, his foot kicked a metal propelling it along the road.

Smith said his brother asked him if he knew what the metal object was and proceeded to tell him that it was a gun.

The youth told the court that he took it up with the intention of taking it to the police, but the police met it with him that same night.

“No lie; the truth,” the youth commented.

The magistrate sentenced Smith to three years in prison, saying, “This is less sinister than the other cases.”

Over the past weeks, a number of residents of Redemption Sharpes and neighbouring communities have come before the court for firearm and ammunition possession.

After Smith was sentenced, he asked a court officer if he was not being granted bail.

The officer then explained that the sentence meant that he would have to spend three years in prison.

One reply on “Sharpes youth jailed for homemade gun”