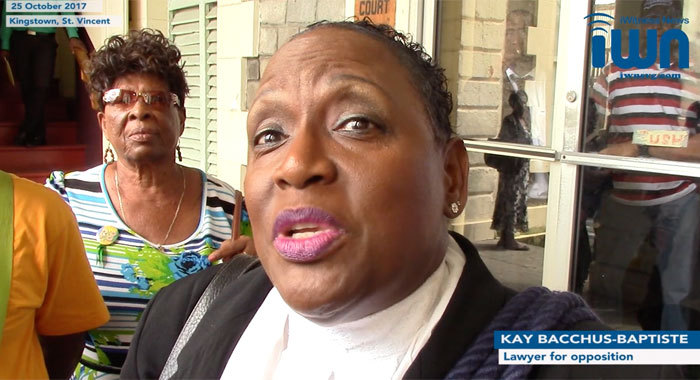 A lawyer for the opposition in the election petitions matter has noted that it was Justice Esco Henry who raised questions about the proposed consent order between counsel for the government and opposition, which the opposition ultimately rejected on Wednesday.

“We had indicated that these very issues would arise and I am very happy that they came from the judge and we made our position clear,” Kay Bacchus-Baptiste told iWitness News after the court proceedings.

The opposition rejected the consent order after lawyers for the government maintained that they would only agree to allow the opposition to inspect four of the 15 ballot boxes used in Central Leeward.

Bacchus-Baptiste told iWitness News that the government’s lawyers have been saying that they consented to inspection of the ballot boxes because they have nothing to hide.

She said that correspondence from her legal team to the respondents stated that lawyers for the petitioners reserve their rights to all of the 15 ballot boxes.

She said that the consent order broke down after the government’s lawyers maintained that they would only agree to the government inspecting unused ballots from four polling stations in the district.

“Our case is strong, we are confident about it and, actually, when they agreed to the consent order, it is because of the strength of our arguments.”

The joint consent order was proposed to save time and cost as lawyers of the main opposition New Democratic Party have filed an application to inspect documents from Central Leeward in the Dec. 9, 2015 general elections.

The NDP has filed two petitions challenging the outcome of the vote in Central Leeward and North Windward, two of the eight parliamentary seats that electoral officials say the Unity Labour Party won to secure a fourth consecutive term in office.

The consent order had proposed that opposition counsel be allowed to inspect four of the 15 ballot boxes used in Central Leeward.

The order was presented to the court on Tuesday, when the application to inspect the ballot boxes was scheduled to be heard.

However, in court, counsel for the opposition said that they reserve the right to inspect all 15 ballot boxes, if the need arises, a proposal that the government side rejected.

This means that the court would now make a determination on the opposition’s June 29, 2017 application to inspect the ballot boxes.

That hearing is scheduled for December 2017 or January 2018 — whichever is most convenient for all parties.

Bacchus-Baptiste told iWitness News that her side was prepared for the case.

“We made it clear to the other side that a consent order is not automatic. Once you come to court, the court has to decide whether or not to accept the consent order.

When Kenny Kentish, counsel for the government presented the consent order to the court on Tuesday, Justice Henry asked him about the actual meaning of some words in the document.

Kentish, however, asked the court for an adjournment to the following day because of the absence of Senior Counsel Douglas Mendes, who is leading the government’s team, and who was the one who had negotiated the consent order with Queen’s Counsel Stanley “Stalky” John, the opposition’s lead lawyer.

On Wednesday, as the court hammered out the mechanics of how the consent order is to be implemented, Bacchus-Baptiste asked the court to instruct the registrar to make a record of the manner in which the contents of the ballot boxes were secured in relation to the dictates of the House of Assembly Election Rules.

The lawyer also asked the court to instruct the registrar to make a record of the design of the ballot paper, relative to the same rules.

Bacchus-Baptiste further told the court that the mechanism of the execution of the order should include instruction for the registrar to say whether the ballot contained a designated space for the official mark to be placed, in keeping with Rule 16 of the House of Assembly Election Rules.

She also asked the court whether photographic evidence of the condition of the ballot boxes and their contents might assist the court.

At this point, Mendes accused the petitioners of altering the agreement arrived at out of court and which was being resent to the court for its approval.

The lawyer, however, said that she was just asking for a record of the conditions of the ballot boxes and their contents when received by the registrar.

Speaking to iWitness News after the court proceedings, Bacchus-Baptiste said the petitioners did not alter their position.