‘Hardship ahead’ for SVG 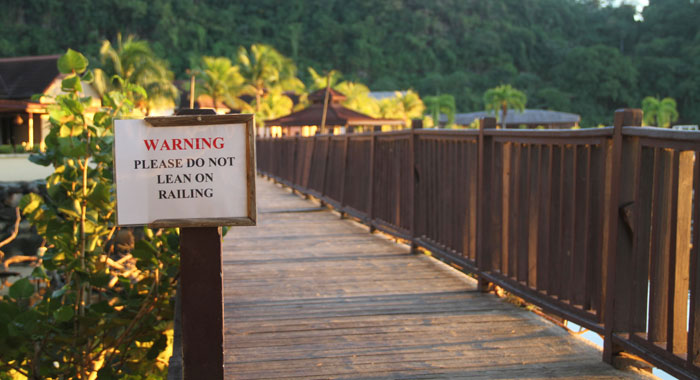 The growth projections are partly hinged on the reopening of Buccament Bay Resort, which has been closed since December 2016. A sign warns beachgoers of the dangers of the crumbling foot bridge at Buccament Bay Resort. The access way had fallen into disrepair after the resort closed on Dec. 14, 2016. (iWN photo)

As St. Vincent and the Grenadines waits anxiously to hear what fiscal package its new Minister of Finance, Camillo Gonsalves, will ask Parliament to approve on Feb. 5, Opposition Leader Godwin Friday says that the latest IMF report on the Vincentian economy is suggesting that there is hardship ahead.

Friday came to this conclusion based on the fact that the International Monetary Fund’s 2017 Article IV Consultation Staff Report for SVG says that the nation’s external debt repayment is higher as government is scheduled to repay EC$128 million on commercial loans that came due in 2017.

“Where is that money going to come from? That means that there is hardship ahead for us. Either increased taxes or the cutting of services of government to the people of St. Vincent and the Grenadines in 2018,” Friday told a press conference held by his New Democratic Party in Kingstown on Wednesday.

He noted that the IMF has said that SVG’s fiscal position is expected to deteriorate in 2017-18, as new revenue measures only partially cover higher outlays.

“Public debt will resume rising despite some debt relief. Moreover, risks to this projection are tilted to the downside given the inadequate policy stance, the uncertain global environment, and vulnerability to natural disasters.

“However, strong spillovers from the new airport, the construction of a modern port, and launching the geothermal project could support growth in the medium term,” said the Washington-based financial institution.

Friday noted the IMF’s use of the word “could”.

“You have to ask yourself, what is the status, for example, of the geothermal project. These are projects that are presented [by the government] to say ‘Well, listen, you are going to write your report, these are things that are in the pipeline, these are things that we are going to do, so factor these into your calculations and your projections and then tell us how we come out.

“How likely is it to contribute to growth in 2018,” Friday said of the geothermal project.

Friday said that the first observation is that the report reflects a negative situation on the Vincentian economy.

He said that the executive summary begins by saying, “Economic activity is expected to remain relatively flat in 2017 but recover in 2018 owing to enhanced connectivity with key tourism source countries.”

The opposition leader noted that enhanced connectivity refers to the Argyle International Airport, which began operating on Feb. 14, 2017.

The Air Canada Rouge Service from Toronto, which Kingstown is subsidising, will operate once weekly during the winter season until April 12, 2018, using an A319 aircraft with a capacity of 136 seats.

Friday said that when the IMF speaks of “‘flat’ growth in 2017, this refers to 1 per cent.

He further noted that the projected recovery in 2018 is 2.7 per cent.

“We would consider ordinarily a 2.1 per cent growth as anaemic growth. But that is the context in which the IMF has come to understand the economy of St. Vincent and the Grenadines.”

He noted that the growth of 2.1 per cent in 2018 is also premised upon the reopening of the Buccament Bay Resort.

“This is, obviously, a big assumption,” Friday said.

The resort has been closed since December 2016, when the state-owned power company cut its electricity connection amidst a major financial crisis at the resort, where workers had not been paid for months and millions are owed to the government and other creditors

Friday, who is also his party’s shadow minister for tourism, said that he has spoken to persons about the resort as he is keen to find out what is happening.

“And I have spoken to people who know what is happening and they said it is unlikely that the project will be open anytime soon. We do not know what is the situation with the hotel,” he said, adding that he has heard talk that an entity in Barbados may have leased it.

“When will it be ready for operations? Will substantial repairs be necessary? So all of these things have been factored in when you are thinking whether the 2.1 per cent, which we will agree is better than 1 per cent, but still anaemic in terms of economic growth, is going to be achievable, given the assumptions that are made by the IMF, based on the information presented,” Friday said.

“Could you imagine that? That’s no growth at all,” Friday said.

“No wonder the people in this country are finding it so difficult. The economy, essentially, hasn’t grown, according to the IMF, during that period.”

He said that in a small economy like SVG, 7 to 8 per cent growth would be expected to generate “real employment and economic activity”.

“Large economies tend to grow 3-4 per cent, you consider that to be good growth,” he said, adding that China’s 7-10 per cent growth annually is “exceptional”.

Friday said that the NDP has been vilified for its emphasis on curbing the national debt.

The IMF also said that government revenue is expected to decline for 2017 and transfers and capital outlays are expected to rise, resulting from, among other things, higher transfers to operate Argyle Airport and for buying back the Bank of St. Vincent and the Grenadines.

18 replies on “‘Hardship ahead’ for SVG”