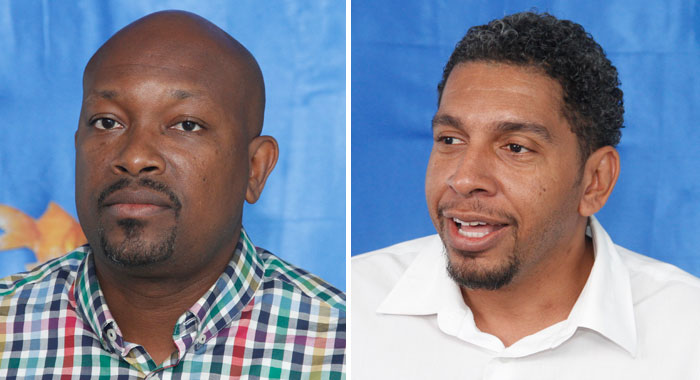 Minister of Agriculture, Saboto Caesar, left, and his Finance counterpart, Camillo Gonsalves, speak at the event in Kingstown on Thursday. (iWN photos)

While the lower house in Antigua has passed a bill decriminalising marijuana, the government of St. Vincent and the Grenadines says that any changes that it makes to the relevant law would be to set up a medicinal marijuana industry.

If the bill becomes law, residents of Antigua and Barbuda will be permitted to have up to 15 grammes of cannabis instead of the original 10 grams proposed.

The proposed law will also make it lawful for a household to have up to four plants in their possession.

But speaking at an event in Kingstown on Thursday — where a U.S. national who was lauded as “an esteemed scientist” but is, in fact, a chef and a deejay conducted tests on samples of Vincentian marijuana — Minister of Agriculture, Saboto Caesar said the insistence of his government is on a medicinal marijuana industry.

“And I want to begin by the last word, industry,” Caesar said, adding that his government is working to ensure that it has the requisite framework in place to enhance the livelihood for the people, create jobs, and diversity the agricultural sector.

He said there are some persons who would wish, for different reasons, “to comingle the issue of recreational cannabis usage with that of medicinal usage but the mandate of the committee which has been established by the cabinet is only, at this point in time, to look at medicinal cannabis”.

Caesar said the discussion about marijuana is very much alive in the Caribbean and that he is following what is taking place in Antigua and Barbuda.

The agriculture minister, however, said SVG has to “be guided by our culture and at the end of the day, we would want what is best for our people and I want to wish all other countries which may have a particular approach, different or similar, all the very best in the advancement of this industry.

“We are here to establish an industry. We want to ensure that we create all the possibilities and opportunities, especially for our young people to not only be a part of the production side but also to be a part of the processing and the extractions that would take place because we have an education revolution in St. Vincent and the Grenadines producing a cadre of intellectuals and, this is an opportunity for us to absorb a lot of that intellectual hardware and capacity and human resource which we have been able to develop over the years into this fledging industry.”

Caesar also said he wanted to show his appreciation of the Christian community, which, he said, “has been engaged significantly in the discussions”.

He said there are over 15 local and international investors who have shown interest in the medicinal marijuana sector.

They had an important first round of a local medical marijuana investment forum which was well attended and persons have been calling and asking for more information.

He said it is not true that local persons would be left behind.

“… no one is going to exclude anyone from the possibilities and the opportunities, however, what is going to happen is, at the end of the day, each person must make a calculation about the investment and the risk that they are willing to take. And what I envisage, what I see that can take place, that we can see persons forming cooperatives and companies so that they can pool factors of production…”

Speaking at the same event, Minister of Finance, Camillo Gonsalves, said that like Caesar, he has noted that other countries in the Caribbean are going forward in different ways on the matters of legalising, decriminalising, and medicinal use of marijuana.

“Everybody has their own different circumstances,” he said.

“Somebody bring it in and other people smoke it. So that is why their focus is on that.”

He said that though illegal, SVG has been producing marijuana and exporting it.

“And that is part of our reality. So we have to deal with an industry that takes advantage of that: the production and export of this product.”

Gonsalves said that, as stated in his budget Address on Feb. 5, SVG is not going to be a bad neighbour and decriminalise marijuana while it remains illegal in Caribbean countries that create the demand for it.

“I think there is tremendous potential here but it is not a panacea, it is not a magic bullet. It is another industry and another product that we hope can add to our general growth and development profile,” Gonsalves said.

Opposition lawmaker Roland “Patel” Matthews of the New Democratic Party said that he supports the decriminalisation of marijuana for recreational uses.

Israel Bruce, the NDP’s candidate for South Central Windward, which Caesar represents in Parliament, says he is also supporting making marijuana legal for recreational use.