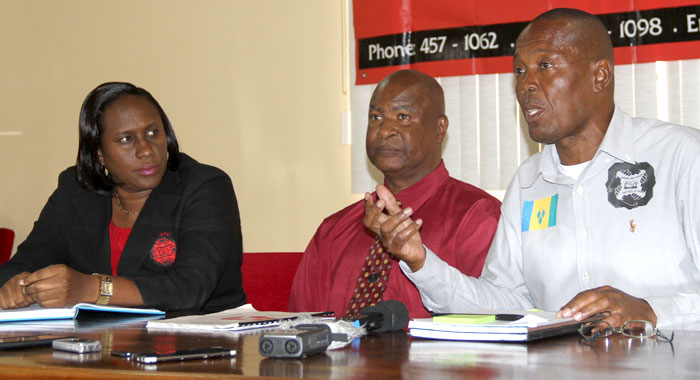 The St. Vincent and the Grenadines Teachers’ Union’s Industrial Relations and Research Officer, Otto Sam, has endorsed outgoing union spokesperson Wendy Bynoe as the next president.

The union will choose a new executive in meetings next Tuesday and Wednesday.

He noted at a union press conference in Kingstown on Monday that union head Oswald Robinson had spoken during the press briefing about the level of visibility and how much the public relations officer and officers have impacted teachers and teacher-related issues.

“The future of the union looks good. I am excited to have been working with this executive and I do believe that the PRO, which her experience and her good work and her forthrightness and her strength to stand up on issues would make an exciting president for the future of the union,” Sam said at the press conference, which Bynoe also attended.

Asked if his comments were an endorsement of Bynoe’s candidacy, Sam said:

“I don’t know if it is an endorsement. I think she will make — and really, I don’t have a problem in endorsing her, because I have seen her work. I have seen the work. It is just a pity that we don’t have the current GS (general secretary) contesting because this should have been a great platform.”

The union general secretary, Paulette Williams, is not seeking re-election or election to any post on the executive.

Robinson, who has been at the helm for six years, will seek to become general secretary in a two-way race with Sheri Edwards.

Of the current executive, Sam said:

“From my experience working with the union, and I’m talking about a personal experience and the connection with teachers, I’ve seen the work of the PRO –and the president said it so I am just really taking from the president’s cue — has been excellent. We’ve been reaching more teachers. There has been a particular kind of effort to reach teachers and teachers have been responding in a particular way.

“As it relates to the first vice-president, I note that the president has been speaking more to the issue affecting teachers, even when the first vice-president might be present, that the president speaks to promotion, he speaks to condition of work … I probably heard him speaking to Teacher Solidarity Week but I cannot recall him speaking to particular issues as it relates to teachers’ working conditions, etc.

“So, I am saying the future of the union is bright, looks bright, once the focus — because the union must continue to carry the issues and the agenda of the workers. The workers’ agenda takes precedent over every other thing and I believe if that is done, the union would be stronger. Testing some of these cases in court so that systemic unfair treatment can be addressed because the court will speak to them in a particular way and I think the platform is set for those who go forward to take it forward.”

Sam said that he anticipates that the new executive will continue to listen to its members, agitate and advocate for socio-economic justice.

“The very objectives of the organisation are outlined and it gives the new executive that framework, among other things, to move the union forward.

“Because this union has a history of hard work and struggle, when your successors come, they see what has been set and they build upon that. They acknowledge your contribution, they look for the areas for improvement and they build on that.”

“We know we have the political divide out there, but people can’t get involved in that,” he told a union press conference in Kingstown on Monday.

Sam praised the work of the union under the outgoing executive.

“This executive has done good work,” said Sam, who the union supported in his successful bid for legal redress over his dismissal from the Public Service in 2013.

“The very focus on appointments and promotions and working conditions, duty allowance and we just said that the Special Needs [teachers] have been paid for 2017, the retroactive amount is to be paid,” he said, outlining the success of the union.

He said a number of teachers have been appointed because of the advocacy on the issues of appointment and promotion.

“So that has been going some places under their watch.”

Robinson said that while sometimes Sam doesn’t want the union to talk about his own success in the court against the government, “You can’t have one of your presidents being treated by the state like that.

“The state dishonoured the collective agreement. The last collective agreement was signed by him as president and as a union we reached out for the brother, he is working with us, he is on the platform with us and we have reaped some success and there are success stories to come very soon again,” he said.

One reply on “Sam endorses Bynoe as next Teachers’ Union president”