Man with gun in crotch jailed 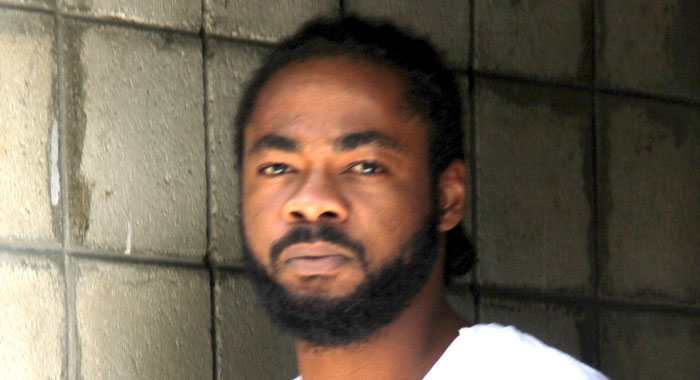 Police nabbed Shane Nichols with a loaded gun in his crotch. (iWN photo)

A Campden Park man who was found with a loaded gun in his crotch was, on Monday, jailed for three years and seven months.

Shane Nichols will, however, just serve three years of his sentence, the penalty imposed for the firearm, as it will run concurrent with the seven-month sentence imposed on him for five rounds of ammunition.

He pleaded guilty at the Serious Offences Court in Kingstown to possession last Friday, March 16, at Campden Park, of an unlicensed .38 pistol, serial number CHZ22796383, and five rounds of .38 ammunition without a license last Friday.

The court heard that last Friday, about 10:45 p.m. Corporal 209 Philbert Chambers led a party of police personnel from the Questelles Police Station on foot patrol around Campden Park.

Police Constable 41 Campbell was also a member of that party.

When they got to the Plan area of Campden Park, near one Josette’s shop, the police officers came upon a group of men smoking what appeared to be cannabis cigarettes.

The police requested searches of the men’s persons and they complied.

Campbell observed that Nichols was trying to slip away from the group and the officer kept him under observation.

He then approached the defendant and with the assistance of his flashlight, began searching him, at which point the defendant began sweating.

This further aroused Campbell’s suspicion said Senior Prosecutor Adolphus Delplesche who was presenting the facts to the court.

At this point, the senior prosecutor, a former detective, turned to Campbell and said, “Good work”.

As the search continued, Campbell lifted up Nichol’s t-shirt and saw a bulge in the defendant’s crotch.

The police officer questioned the defendant about the bulge and he said it was “Nothing, officer.”

Campbell proceeded to search the area and found the gun there, loaded with the ammunition.

Nichols was taken to the Questelles Police Station, where he told police, “Officer, me ain’t no trouble man. Me real sorry.”

In mitigation, lawyer Richard Williams told the court that Nichols is a 23-year-old carpenter who lives with his parents.

He noted that his client had expressed remorse to the police from the inception and has cooperated with them.

Williams suggested that if a custodial sentence be imposed it be no longer than 18 months.

However, Delplesche noted that in a Jan. 16, 2018 ruling, the Court of Appeal had said that firearm possession is a very serious offence and that there were too many gun crimes in St. Vincent and the Grenadines.

After consulting recent court rulings on similar matter, the magistrate imposed the sentences, among the mitigating factors being the defendant’s age, early guilty plea and the fact that he had no antecedents.

4 replies on “Man with gun in crotch jailed”