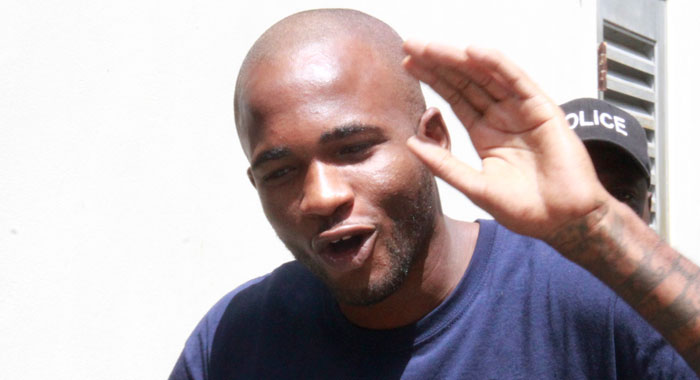 Mwata Henry, 25, has been slapped with a murder charge and six counts of attempted murder. (iWN photo)

Redemption Sharpes resident Mwata Henry, 25, is scheduled to appear before the Serious Offences Court tomorrow (Tuesday), where one murder charge and six counts of attempted murder will be read to him.

Henry, who has been on remand for the past week on a conspiracy to commit murder charge, was scheduled to re-appear before Chief Magistrate Rechanne Browne Matthias today for another bail review.

Henry, along with Dwayne “Sniper” Stevens, 28, and a 15-year-old male secondary school student, all of Redemption Sharpes, has been indicted on a charge of conspiracy to murder Collrise “Quinn” Pompey.

Pompey, 25, died on March 2 after being shot in the head at Redemption Sharpes.

On Monday, when the trio reappeared in court for bail review for a third consecutive Monday, Senior Prosecutor Adolphus Delplesche told the court that the Crown maintained its objection to bail.

He told the court that more charges would be laid later that day.

And, by Monday evening, Henry was charged with the Jan. 24, 2018 murder of fellow Redemption Sharpes resident, Jahbarry Charles.

Charles, 22, died after being shot, along with five other persons, two of whom are students, as he celebrated his 22nd birthday in the Central Kingstown community.

Reports are that Clifton and Maurice Charles were the only ones gathered at the birthday celebration who were not injured by gunfire.

When Henry appeared in court on Monday, he complained to the chief magistrate that a detective had questioned his 8-year-old daughter in the road as part of the murder investigation.

Henry said that he would like the court to look into this.

The two other co-accused on the conspiracy to commit murder charge are also expected to re-appear in court today for further bail review.