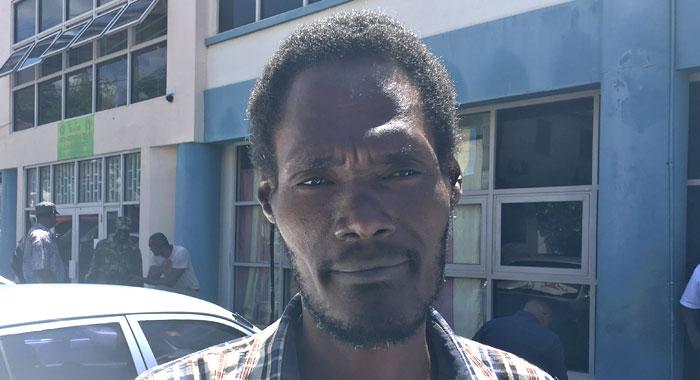 Stanley Andrews will spend three months in jail for his crime. (iWN photo)

A Vermont man was, on Thursday, jailed for three months for stealing EC$10 worth of dasheen from a farmer in the agricultural community two days earlier

Senior Magistrate Rickie Burnett handed down the sentence on Stanley Andrews, 42, one day after he pleaded guilty to the charge.

Andrews told the Kingstown Magistrate’s Court that he wanted the dasheen to cook.

However, the magistrate told the defendant that he has heard that explanation before, adding that when persons are convicted or plead guilty to similar charges, they come up with all sorts of excuses.

Burnett asked Andrews why he did not ask the owner, 47-year-old farmer Cornel Penniston, for some of the produce.

He noted that while the value of the stolen produce was EC$10, praedial larceny is a serious problem in SVG.

Meanwhile, Senior Prosecutor Adolphus Delplesche told the court that the seriousness of the crime should not be lost in the value of the stolen items.

Delplesche, a former detective and inspector of police, told the court he has known Andrews since he (Delplesche) was attached to the Criminal Investigations Department.

Delplesche said that Andrews is what detectives refer to as a “faithful customer” – a reference to the frequency with which he runs afoul of the law.

The prosecutor said he has a particular stance on praedial larceny.

“People must feel, because they are not hearing,” Delplesche said and asked the court to impose a custodial sentence.

The magistrate said he listens to and reads comments in which people sometimes defend the actions of criminals, including trying to excuse the action of thieves of agricultural produce who are punished when caught.

Delplesche said he, too, hears those comments but said that the law is the law and that defence of criminality is outside of the culture of St. Vincent and the Grenadines.

“It is from that angle I take my cue — the hard working farmers,” the senior prosecutor said, adding that when farmers sow, they should be allowed to reap.

According to the record presented to the court, Andrews’ last conviction was in 2002.

However, Delplesche said he knew this was not the case.