Nasty is as nasty does 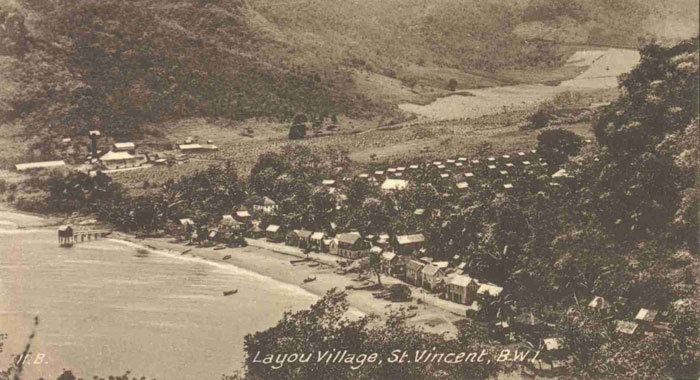 A photo of Layou from the 1920-1930 period showing the ample sandy beach just before the era of rampant sand mining for the manufacture of concrete blocks for the popular Curacao houses that were replacing the earlier stone and/or board structures.

The current Unity Labour Party government of SVG has been employing lots of resources, time, energy, faith, and political capital trying to transform the mainland into a desirable international tourist destination.

Regrettably, these efforts have not been accompanied by any serious concern with protecting, restoring, and enhancing the physical environment, as is required for a thriving tourist sector in an age of so much international competition. Foreign visitors simply don’t want to come to a place that is dirty, nasty, and rusty when they can choose from countless locales that are clean, attractive, and unspoiled.

In a recent essay, I posted images of the neglect and decay at both the shuttered Buccament Bay Resort and adjoining beachside portion of the community of Buccament.

My aim here is to document a sliver of the widespread and acute neglect of environmental concerns in the neighbouring leeward community of Layou, a place where several local people have valiantly tried for years to tap into the tourist market with various types of visitor rental accommodation.

The small, compact town of Layou (population approximately 2,500 people) located on the mid-leeward coast, a community tracing its post-contact roots back to the first French settlement in the early 17th century, was ideally suited for habitation given its seaside location, sheltered bay, flat elevation, and access to drinking water from the Layou River bisecting the surrounding valley.

The town has gradually grown due to a high pre-contraception birth rate tempered by high infant mortality and adult lethal morbidity. This has been augmented by the emigration of people from neighbouring communities and overseas.

A dramatic population burst occurred as a result of the 1902 Soufriere volcanic eruption, which saw hundreds of refugees displaced from the northern parts of the leeward area relocated to Layou where they received small board houses and agricultural land from the British colonial government to compensate for their loss.

The most striking recent growth has resulted from the sale of house spots by the owners of Rutland Vale Estate (misspelt as “Ruthland” in recent years), named after a county in the East Midlands of England, presumably the ancestral home of Josiah Jackson, its first owner, to accommodate retirees coming home from England after decades of largely menial work. This has been supplemented by the movement of mainly middle- and working-class people from other parts of the mainland to the sprawling neighbourhood north of the Layou River stretching from the sea to the Leeward Public Highway leading to Barrouallie.

Apart from the many large homes that have built on the former Rutland Vale Estate, historically the largest planation in valley named after it, the most dramatic physical change has been the slow but steady degradation of the natural environment and supporting human-made infrastructure beginning in the 1960s, if not earlier, whose consequences are no more starkly seen than by the ugly retaining wall that occupies much of the southern part of Layou Bay made necessary to prevent chronic flooding intensified by decades of ceaseless sand-mining.

All of the decay and neglect described below has occurred under the watchful eye of Sir Louis Straker, the town’s parliamentary representative and, as the country’s Deputy Prime Minister, the second most powerful man in the land. Straker lives in a palatial residence on the secondary road shown in the following photographs in the seaside neighbourhood called Plan.

As is typical all over the country, the dead dog had lain on this road for three days when the photo was taken. It was only removed the next day. The town clerk responsible for the removal of animal carcasses lives a five-minute walk away.

These photographs on a single secondary road and adjoining beachfront reveal only a tiny portion of the environmental neglect and decay in a once pretty little town, a community where people were able to drink untreated upstream river water until the 1960s and where five seines used to regularly catch inshore fish up to the mid-1970s.

This neglect and decay, right under the indifferent nose of both the people and their elected representatives, is also a microcosm of what has occurred all across our beautiful land for at least the past 60 years. Yes, we now have more food to eat, more clothing to wear, more current to burn, more toilets to flush, and more money to spend on nice time and nice things than in the late 1950s. But our beloved country — the physical space that defines both who we are and how people see us — has been unconscionably despoiled in the process.

If we really want to grow our mainland tourist industry, a shiny new pint-sized, budget-class airport would not do the trick, if only because tens of millions of tourists have shown their eagerness to visit remote but attractive destinations around the world without the alleged incentive of direct overseas flights.

With so few desirable or unique attractions on the mainland, including no natural, pristine, miles-long white sand beaches fronting shallow, glistening aquamarine waters, we are simply damaging our efforts to attract thousands more international tourists unless we pull up our socks and clean up our act.

On the other hand, if all these tourist efforts are nothing more than window dressing meant to gain more votes, not more visitors, as I have repeatedly declared in my series of Argyle airport essays, then this nastiness is destined to continue for years to come.

This is the 71st in a series of essays on the AIA folly. My other AIA essays are here.

22 replies on “Nasty is as nasty does”