The Morgans’ saga is far from finished 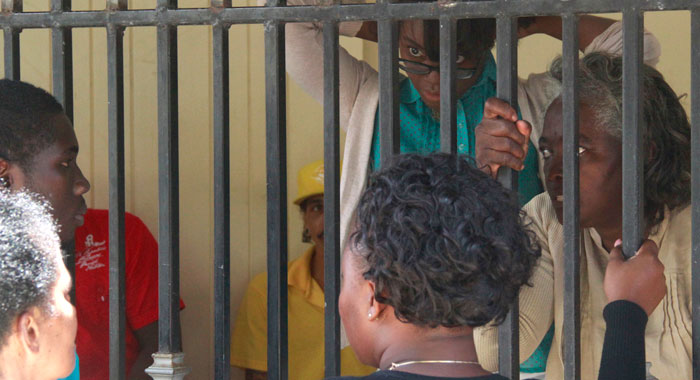 A dectective monitors interaction between Althia Morgan and her son at the holding cell at their court on Monday. Chrystal Morgan, standing to the left of her mother in the cell, will also spend four years in jail. (iWN Photo)

The verdict in the case of a pastor, his wife, and daughter charged with burning a man with a hot liquid has been given but I can guarantee the public that this case is far from over. There is no need to repeat the facts of this case. Senior Magistrate Rickie Burnett sentenced each Morgan to four years in prison. Naturally, there are many members of the public, both locally and in the diaspora, who do not believe that the sentences reflect the severity of the charge. The “court of public opinion” would sentence each of the Morgans to death if they had the legal ability to do so.

However, having read the sentencing guidelines based on this charge and similar judgments, I believe that the Senior Magistrate upheld justice in all spheres. I deem it very important to highlight that, based on the facts of the case, past judgments (precedents) and the mitigating factors (no antecedents and good character), inter alia that magistrate Rickie Burnett’s judgment was fair and just. It is also noteworthy to highlight that based on the law in St. Vincent and the Grenadines (SVG), the maximum sentence for this type of offence at the Magistrate Court level is seven years imprisonment.

I do expect that some may ask, why then didn’t the senior magistrate give each Morgan the maximum sentence? However, while human beings are emotional beings, such emotions cannot and should not impact or influence the law. Thus, given the facts of the case, it is very unlikely that any court would gave a “virgin to the law,” the maximum sentence as a first-time offender. Like it or not, the Morgans, prior to this charge, were “virgins to the law”.

Were their actions horrendous? Certainly! However, judicial officers are guided by the laws of the country and should not be influenced by anything outside the scope of the law. Therefore, having stated the maximum sentence, it is my personal opinion that the court sent a strong and clear message against offences of this nature. Further checks of similar cases and sentencing in fact reveal lesser sentencing. In a later paragraph, I will highlight why defence counsel will use precedents of similar cases in her grounds of appeal.

Another question that may be asked is why the Morgans were not charged with “attempted murder”? Yet again, human emotions and empathy may take precedence in the minds of most. Nevertheless, we must all be cognisant that before any person is charge, the authoritative bodies must first ensure that all the elements of the charge are present. I am confident that the prosecution did this test and having considered the facts, the “lesser” charge was made as opposed to the charge that the populace may have preferred. Consider this, how more upset would some of us have been if, the Morgans were charged with attempted murder and then some — or all — of the elements of the charge were hard to prove, which could have resulted in acquittals? I foresee a greater public outcry if this course of action occurred, which comforts me that the best decisions were made by all judicial officers involved in this case from its inception.

Defence Counsel Kay Bcchus-Baptiste has clearly indicated that she intends to appeal her clients’ sentences. If I am to be presumptuous, with valid reason, her first ground of appeal will be the severity of the sentences. This ground will be supported by past sentencing based on similar facts. Before penning this article, I did a search of several similar judgments, which revealed lighter sentences. Based on these facts, the question arises as to whether the Court of Appeal will agree with defence counsel and lower the sentences; or will they uphold the sentences of the senior magistrate? Time and time alone will tell.

Additionally, it is to be noted that given that any audience before the Court of Appeal will not be in the immediate future, I also foresee that Bacchus-Baptiste will make an application to the court for bail of her clients pending their appeal. What does this mean? Simply put, if the court agrees with her bail application, the Morgans will be out of prison until they are given the opportunity to be heard by the Court of Appeal. I do believe that perhaps even before the publication of my article, Bacchus-Baptiste may be successful in her bail application. Again, time and time alone will tell.

In the start of this article, I did say that this case is indeed far from over. I do expect higher emotions by the public if the Morgans are released from prison pending their appeals. However, the law has to take its course.

In the interim, if I was to offer some free legal advice to the virtual complainant, Cuthbert Victory, it will be to commence immediately civil proceedings against the Morgans for damages. The harsh reality is that no amount of money will ever compensate a victim that has suffered but Mr. Victory will have to decide whether or not, he desires to proceed with a civil suit.

In summarisation, I pray for the best legal resolutions in this matter. This case has touched the emotional core of everyone who has been following it from day one. However, common sense dictates that whenever it concludes, some people will still not agree with the outcome.

This case is a simple reminder of “life and its harsh realities”.

39 replies on “The Morgans’ saga is far from finished”