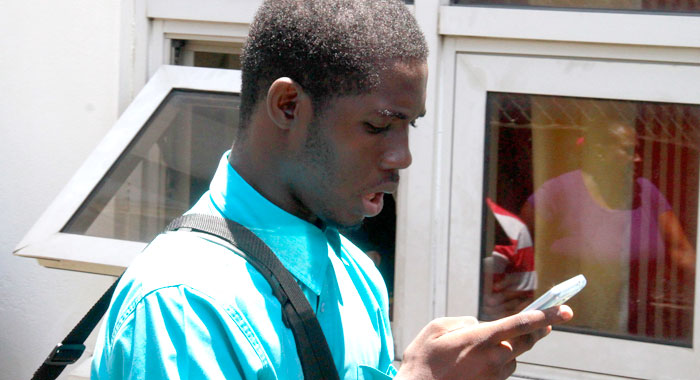 On the day that his parents and older sister were jailed for dousing a man with hot water, Kristofa Morgan, on Monday, assaulted journalist Kenton Chance outside the court, where the sentence was handed down.

Chance, executive editor of iWitness News, was videotaping activities outside the Kingstown Magistrate’s Court when Kristofa, 18, was seen walking behind his convicted sister, Krystal.

Police were escorting Krystal, 23, to the restroom, minutes after she was sentenced, along with her parents Nigel and Althia Morgan, for pouring a hot liquid on Caruth resident Cuthbert Victory two years earlier.

As Chance was apparently videotaping Krystal in police custody, Kristofa, with arms wide open, was observed walking towards the direction of Chance and another journalist who were standing in the area of the car park which is on a slightly higher level.

On reaching close to Chance, Kristofa suddenly stopped and grabbed Chance by the hand.

He appeared to be applying force to Chance’s hand.

He later told his colleagues and other person outside the court that Kristofa had held his hand with vice-like grip.

One woman, to the amusement of the crowd outside the court commented, “Like the demon dey in he mek he squeeze the man so hard.”

During the trial, Nigel had told the court that on the day that he and his wife and daughter burned Victory, the plaintiff was acting as if he was in need of spiritual deliverance.

Krystal had told the court that she felt as if her soul had left her body when she left the upper floor of two-storey house and went to the street, where she poured the hot contents of the kettle on Victory.

Minutes after assaulting Chance, Kristofa was observed exhibiting reluctance to obey police orders to not follow his sister, who was being taken to the restroom on the upper floor of the two-storey building.

The Serious Offences Court is located in the section of the building where Krystal was being taken to the restroom.

Police further asked Kristofa to move from the area but he remained there.

As Kristofa continued to disobey the orders of several uniformed police officers to vacate the area, one officer moved closer to him and escorted him from the area close to the holding cell and up to where a small crowd was gathered.

Nigel, Althia, and Krystal were, on Monday, found guilty of a joint charge that on April 9, 2016, at Hopewell, Mesopotamia, they unlawfully and maliciously inflicted grievous bodily harm on Victory.

Victory received burns to his back, chest and face when Krystal poured on him a kettle of hot liquid –said to be water — as her parents held him in a gutter just outside their home in Hopewell.