Price of sand to increase as Diamond mine closes on Sunday 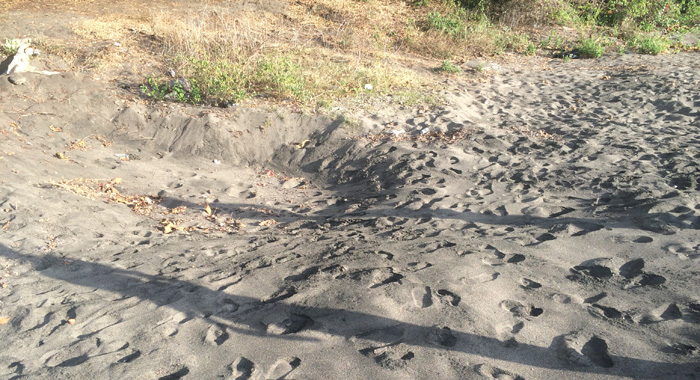 The government is looking to ban the mining of sand on beaches in SVG. (iWN file photo)

Sand mining at Diamond Beach will end on Sunday.

Minister of Works, Sen. Julian Francis made the announcement at a press conference in Kingstown on Tuesday, where he said that a new mining site will open on the seashore at Rabacca and will operate for about three months.

Consumers will see the price of sand in some parts of the country increase as a result of higher trucking costs, the minister noted.

He, however, said that the government will continue to sell sand at EC$14.50 per cubic yard — as is the case at Diamond.

The minister suggested that it might cost EC$400 to truck a load of sand from Rabacca to Kingstown, and EC$600 to Barrouallie.

“We have to close Diamond, like we have done to Brighton. And we have come up with a beach in Rabacca called ‘Drip’,” he said, adding that excavators have to go closer and closer to the water’s edge to mine sand in Diamond.

The situation is exacerbating the environmental hazard associated with sand mining on beaches, the minister said, adding that the government will push ahead towards a total ban of sand mining on the nation’s beaches.

Francis said the government has been working over the past week and a half to prepare the area at Rabacca for sand mining.

“There is a good deposit of sand on the beach and we want to shift from Diamond to Rabacca… All the things are being put in place to have that ready. We have already up to Friday stockpiled up to about 200 cubic yards of sand. We are not going to allow the trucks to go onto the beach itself. We have made the entrance from the hard land to the beach itself very difficult that you have to have a caterpillar truck to drive onto the beach to get the sand from that location…

“So, effective Monday, Diamond will be closed off… There will be security put at Diamond to make sure that nobody is continuing to mine sand there and, on Monday, Rabacca will be open for selling sand.”

The minister said that the government intends to move to the importation of sand and utilising the locally produced at Rabacca Dry River.

He said there is another supply of that sand at Larakai on the leeward side of St. Vincent, and more than one companies have shown interest in a similar operation to what is being done in Rabacca.

“In fact, just last week, one such operator approached me on immediately proceeding on establishing a mining operation and a sifting operation at Larakai.”

He said that Larakai is located in the north-northwest of the country and the terrain does not allow for trucking.

“So it will mean we will have to barge or use a roll-on/roll-off [vessel] to take the sand to a suitable location.”

Francis said he is carrying our discussion with another operator to do a similar operation in the Wallibou River — immediately past Richmond Beach.

“There are lots and lots of acres of land in that area with suitable sand for mining… They have already done an environmental impact assessment, they have already submitted an application to Physical Planning Department and I believe that they have an approval in principle.

“What has to happen how is that that organisation and the government’s chief surveyor have to sit down and work out a proper arrangement with the land lease-hold arrangement and the Ministry of Works get involved with them on royalties, rental, whatever it is. But we are at that point of negotiations.”

Francis said that he is also in discussion with a group that seems to have interest in aggregate production, from the point of view of hard granite rock.

“In this exercise of the sand mining, it is going to be critical that the public gives support to the government and to the country.

“There is demand for sand and there are persons out there who will try to abuse a situation. I’ve already spoken to the Commissioner of Police, we have discussed this matter at the Cabinet and the Minister of National Security has assured me that he will have the police give support to us in this exercise. I know that persons steal sand at other beaches.”

He said that he knows that illegal mining of sand takes place in Wallibou and Rose Place and there is also evidence of theft of sand from Brighton, although the sand mine there has been closed.

“And I am asking residents to help us in policing this. It is a national matter that we have to address and all of us have to take responsibility and be responsible with it.”

He said that during the three months that mining continues at the beach in Rabacca, the government will be preparing and encouraging persons to buy and use the sand the government produces at the inland site in Rabacca.

There, the government produces shifted sand and washed sand for use in construction.