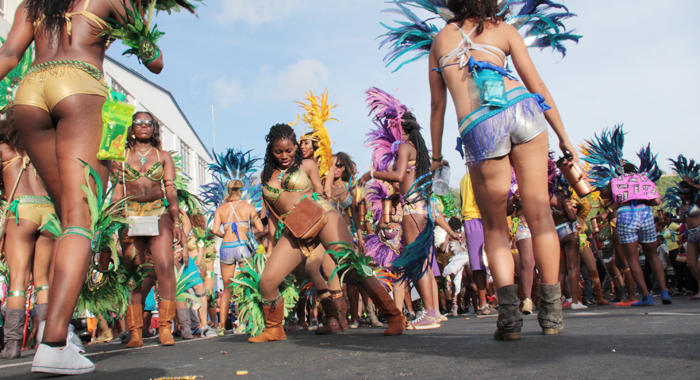 Masqueraders party in Kingstown during Mardi Gras 2014. The show returns to Victoria Park this year, after being held at the bus terminal in Little Tokyo, Kingstown in 2017. (IWN photo)

Mardi Gras this year will take place at “Carnival City”, Victoria Park, Kingstown, rather than at the bus terminal, Little Tokyo, as happened last year.

After just one year of an experimental move of the event to the bus terminal, the Carnival Development Corporation announced on Tuesday that they are giving costumed bands what they want by returning the show to Victoria Park.

Further, patrons would not have to pay to view the event.

“Mardi Gras this year will return to the Victoria Park and the venue will be absolutely free of cost, so to those persons who thought that the $5 charge was a deterrent, you are encouraged to make your way down to the Victoria Park,” chair of the CDC, Ricky Adams said in making at the announcement at a press conference in Kingstown.

He said that meetings were held on the issue up to Monday night and the mas’ men were insistent on going back to Victoria Park.

“… so we’re carrying them back to Victoria Park and we’ve further decided that we will make the venue free so that anyone who is interested in going to view the mas’ men tell their stories as they cross the stage, you are certainly welcomed and encouraged to do so,” Adams said.

Speaking at the same press conference, President of the Carnival Bands Association, Hugh Ragguette said he expects that mas’ bands would “put on a great show once again” this year.

“And we expect that we will be able to maintain our professional standards,” he said.

He added: “We will try and improve our time keeping on Carnival Tuesday.”

Ragguette was referring to the length of the story, which is often punctuated by long periods with no bands “crossing the stage”.

He invited everyone to take a second look at the masquerade component of Vincy Mas “and to grant us your cooperation at all the events”.

3 replies on “No more Mardi Gras in Little Tokyo”