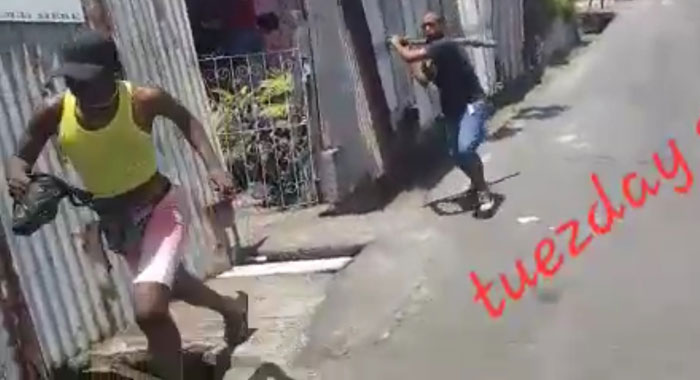 In this screenshot taken from video circulated on social media, one of the suspected gays tries to escape as a man pursues him with a club in Calliaqua on the weekend.

Police have launched an investigation into an incident in Calliaqua during which at least two male cross-dressers were attacked and beaten in the East St. George town on the weekend.

Acting Commissioner of Police, Colin John told a press conference in Kingstown on Monday that he had seen a video of the attack.

iWitness News has seen two videos in which two men, believed to be in their 20s, try to escape their attackers, who were pursuing them with pieces of stick.

As one of the men run the veritable gauntlet, several persons attempt to kick him.

The men are two of three who have, over recent weeks, been walking through Kingstown dressed in women’s clothes.

They are widely rumoured to be gay.

Speaking at the press briefing, the police chief said:

The commissioner was speaking at a press conference called by Prime Minister and Minister of National Security, Ralph Gonsalves, to speak on the alleged attack of a 70-year-old Peace Corps volunteer in Kingstown around 7 a.m. on Aug. 20.

Gonsalves said the police would address the issue of any crime against the cross-dressers who were attacked in Calliaqua.

He, however, condemned the attack, saying:

“First of all, it is unbecoming and wrong for anyone to hold any individual and just beat them for whatever prejudice they may have.”

He said this includes a male dressing in a manner that would suggest that he is gay.

“Just let them be. Why are you beating them? You have no right to do it. That kind of irrational homophobia is entirely unacceptable.

“You may think from your own value perspective and your own religious belief that homosexuality is wrong. As far as I am aware, and, in fact, I am empathic that the law doesn’t give anybody the right to go and beat somebody if they think that they may be a homosexual or may be advocating a homosexual lifestyle.”

The prime minister, however, said that there are laws in the country that speaks to acts of indecency.

“Whether dressing up like women amounts to an act of indecency would be an interesting test case from a legal standpoint. And I don’t know. I suspect that the police would have to consult the DPP and so on about these things,” said Gonsalves, a lawyer, who is also Minister of Legal Affairs.

“This issue, we have been talking around it. There is underneath it, underlying it, a history of discrimination against gays and lesbians,” he said and called for a national conversation on same-sex relationships, but said some other person or entity, not politicians, should start the discussion.

Gonsalves noted that the law says that engaging in “buggery” is a criminal offence and in relation to lesbians, it is within the ambit of “indecent sexual acts”, which are proscribed by law with punishment by imprisonment.

He said he feels sure that the church is not unmindful of what is taking place around the world and might consider whether they should start a national conversation on the subject.

On Tuesday, a video emerged on social media, accompanied by a male voice showing the appalling condition at a location where the three cross-dressing males are said to live.

Two of the three men attempted to hide their faces as the man making the video continued his commentary.

One woman who saw the video told iWitness News she wondered whether the intention behind it was to expose the men to further potential physical harm by telling persons with untoward intentions where the men could be found.