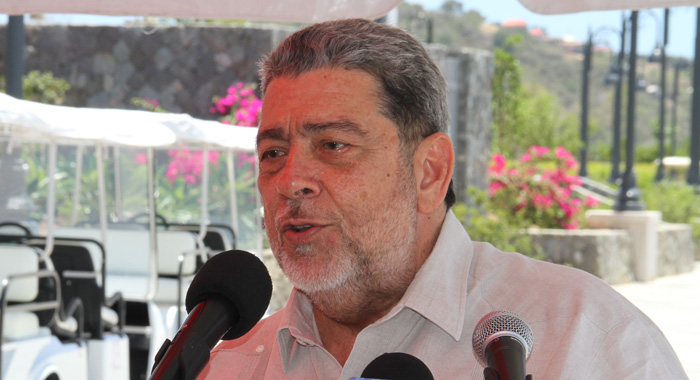 A number of Christian clerics have been identified as being respected enough to lead a “sensible” conversation about same-sex relationships in St. Vincent and the Grenadines.

Prime Minister Ralph Gonsalves named them on Monday at a press conference at which, for the second time in a few years, he called for someone to lead a conversation on same-sex relationships in the country.

“You know, somebody with the authority of the Anglican Bishop; Reverend Adolph Davis, the Methodist Superintendent, Father Mike [of the Catholic Church], individually or in the Christian Council, a bishop in the Pentecostal Assembly of the West Indies, who is a very sensible and wise individual — Bishop Sonny Williams; a retired person like Dr. George Frederick from the ministry and they would have, I am sure, interesting perspectives to bring on this question and others would, no doubt, including young people I would be – I don’t think it would do harm. I think such a discussion can only do good.”

Gonsalves has shied away from leading such a conversation, saying that he does not think that it should be done by a politician.

In his comments, he hinted acknowledgment of the potential fallout for a politician leading such a discussion in a country that is still largely homophobic.

Ask how productive it would be for church leaders to lead such a conversation in light of the fact that some churches leaders “are accused of sexual misconduct, including being gays and lesbians”, Gonsalves said:

“The point about it is this: in the conversation, my dear sister, all of that comes out in the wash and if there is, as you have alleged, … one or more church persons in leadership who are gays or lesbians and they so identify themselves to help to lead the discussion, they may give a theological perspective which may be enlightening and which may help in sharpening or elucidating the discussion.

“… we have to talk about these things. And the politicians are the wrong people to talk about them, because as soon as you get there, people begin to play into one prejudice or another and begin to accuse people of this or that position.

“Once, somebody tried from the NDP side, said that they would have wanted the NDP to start the conversation and they made the thing of trying to drag me into it and so on and so on,” he said, referring to comments by former opposition senator Vynnette Frederick in March 2015.

“So, I said I don’t know why anybody wants to drag me into this. And I feel that the best, civil society, including the churches, I believe they are the better entities to have that conversation. At least, I genuinely feel so. What the results would be, I don’t know. But I think, generally speaking, it should be helpful.”

The prime minister’s comments came as he condemned a mob attack of two cross-dressing men in Calliaqua on the weekend.

Some parts of the attack were recorded on video and shared on social media and police say they are investigating.

Also, he was speaking at a time when the family of Spiritual Baptist Bishop, Ian Enoch, 50, prepares to bury him this weekend, three weeks after he was found chopped to death at a re-created Carib Village in Argyle.

Anwar Jack, 24, who has been charged with Enoch’s murder, reportedly told police that he killed the Christian cleric during a same-sex encounter.

However, some persons have raised questions about the man’s claim while others have rejected it outright, noting Enoch’s religious and social status.

It had long and widely been rumoured that Enoch, who was married, was bi-sexual.

His widow has rejected the claims about her late husband’s alleged secret lifestyle.